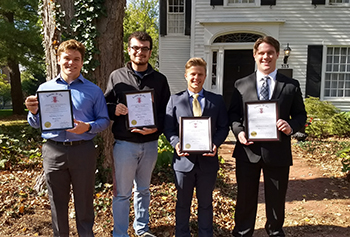 Lambda Pi Eta (LPH) is the official honor society of the National Communication Association, and has active chapters at colleges and universities worldwide.  The Wabash Chapter of Lambda Pi Eta was chartered in 2014.  Each year, students are invited to join Lambda Pi Eta in honor of their academic accomplishments in the Wabash Rhetoric Department.

Wabash students interested in the requirements for Lambda Pi Eta may talk to Professor Sara Drury, the chapter’s advisor.