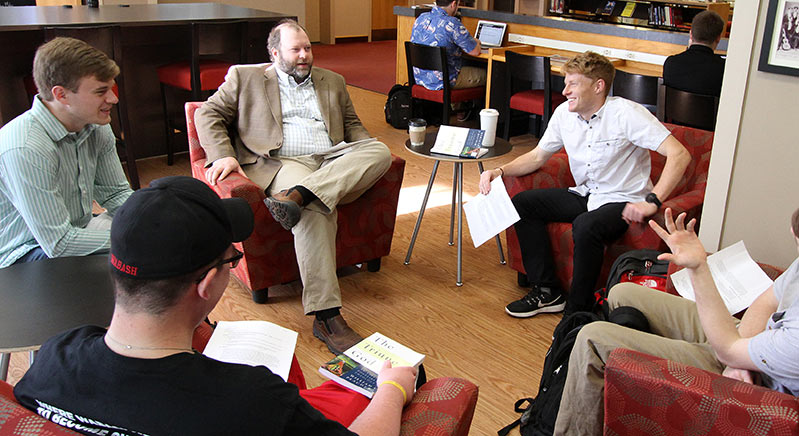 What is Religion as a field of study?

The Wabash College Religion major studies everything from ancient texts to contemporary issues — from religious traditions he knows well to those that are new to him. By its nature, Religion encompasses a wide diversity of academic disciplines, including the study of theology, philosophy, history, sociology, anthropology, cultural studies, and literature and the arts. Learning how people have understood and practiced religion throughout history is important for understanding our world, while also being intellectually exciting and personally enriching. For specific Religion course offerings, check out our curriculum.

Why major in Religion?

Religion has always been a popular major at Wabash, and the college’s Religion Department continues to promote the academic study of Religion as part of a rich, well-rounded liberal arts education. Our Religion classes are intended for all students, including believers, skeptics, and seekers of all kinds. Our faculty encourage rigorous and critical engagement, challenging students to understand the nature and purpose of religion and religious beliefs, both their own and those of others. This robust development of understanding prepares Wabash students for success in graduate school, in religious vocations, as teachers of religion, and in all career options open to liberal arts graduates.

The Wabash Religion Department also supports a variety of activities on campus, such as the annual Christmas Festival with the Music Department, events hosted by the Muslim Students Association, a weekly religious chapel in the Protestant Christian tradition, the Roman Catholic Newman Club, Wabash Christian Men, and other student religious activities.

What can you do with a Religion degree?