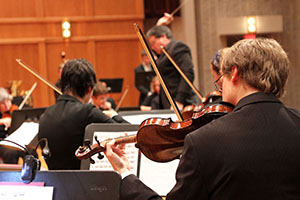 The Wabash College Chamber Orchestra performs major concerts in both the fall and spring semesters. Under the direction of Alfred Abel, the orchestra has performed works by great masters like Bach, Bartok, Stravinsky, Beethoven, Brahms, Ravel, Vivaldi, Haydn, Handel and Mozart, and less frequently performed composers including Rameau, Mouret, Purcell, Byrd and Jenkins.

WCCO draws its members from the Wabash student body and from musicians on the faculty and staff, from local professional and amateur musicians, and from a few advanced secondary school students. This diversity provides a wide spectrum of musical expertise and training. It allows Wabash men to benefit from playing with more experienced players and encourages them to pass along their own abilities and experiences to other less advanced players. This symbiosis has brought together a particularly intelligent, relaxed, and friendly group of musicians who support one another in a common love of and commitment to great music. 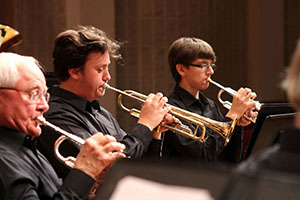 The Wabash College Brass Ensemble performs at several events each year. Under the direction of Chad Downey, the Brass Ensemble has performed a wide variety of works from the Renaissance to the avant-garde, from 16th-century cathedrals and town halls, to the blues and the Beatles.

Joining the Wabash men who bring their discipline and musicianship to the ensemble are members of the faculty, staff, and Crawfordsville community. The ensemble includes music majors and minors, as well as those for whom music is just an important part of life. The Wabash College Brass Ensemble welcomes the participation of players from a variety of backgrounds who are willing to dedicate themselves to disciplined rehearsal and high standards of performance. 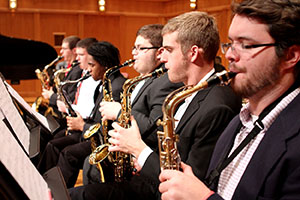 The Jazz Band is a performance ensemble that includes saxophones, trumpets, trombones, piano, guitar, bass, and drums. The group plays music of the Big Bands in the style of Count Basie, Glenn Miller, Duke Ellington, and others. The Jazz Band performs in concert at least twice each semester.

In the Jazz Combo, emphasis is placed on developing improvisational skills and individual expression while mastering standard jazz tunes. Membership in this small combo is drawn from personnel in the larger Jazz Band. 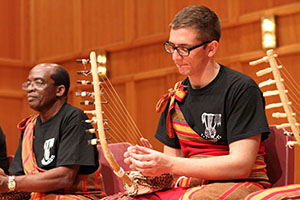 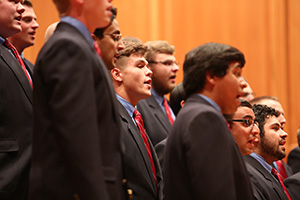 While the tradition of singing at Wabash College dates back to its earliest years, formal organization of the Glee Club was established by 1892. The Glee Club has been an indispensable part of Wabash College life ever since – and looks forward to celebrating its 125th anniversary in 2017.

Performing for a variety of College activities and concerts during the academic year, the group also makes a annual concert tour in the U.S. Recent Spring Break tours have included Philadelphia (2013), St. Louis (2014), and the 2015 Texas Tour, which included performances in Austin and San Antonio. The Glee Club’s international concert tours have taken its members to Wales, England, Scotland (2006), and Ecuador (2010 & 2014).

An ensemble for men who enjoy singing, Glee Club members are drawn from all academic disciplines. The group’s mission is the pursuit of excellence in the art of singing: the establishment of close friendships within the Club enhances this excellence. The men of the Glee Club infuse dedication and spirit into the life of the organization. In return, the music they make brings joy and inspiration to the lives of its members and the Wabash College community by “spreading the fame of her honored name.”