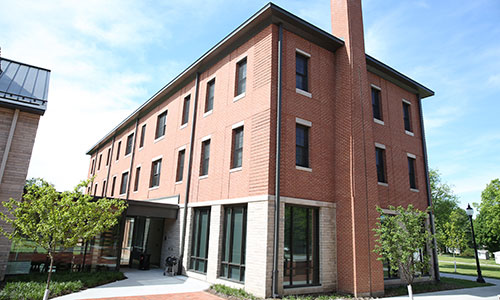 Williams Hall and the adjoining lodge are part of the Residential Life District on the west side of campus and were opened in 2016. The buildings feature a total of 56 beds in a variety of room and suite configurations, including single and double rooms, as well as three- and four-man suites. Additional features of the Hall and lodge include a connected seating area, a family room, study and meeting spaces, and a shared kitchen. There are also common outdoor patio areas and a barbecue for residents’ use. Williams Hall is named in honor of Raymond B. Williams H’68, who served Wabash College from 1965 to 2002 as Professor of Religion, the LaFollette Distinguished Professor in the Humanities and the founder of the Wabash Center for Teaching and Learning in Theology and Religion.