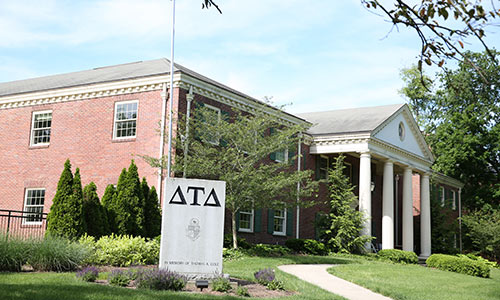 Delta Tau Delta, at 603 West Wabash Avenue, houses 63 men quite comfortably. It was renovated in the summer of 2008, and has several common areas, social spaces, and a large recreational walk-out basement that leads out to Crawford Avenue.

Once known as Cole Hall, it was so named in memory of Thomas A. Cole, a brilliant Wabash student and long-time member of the Wabash faculty. As a student, Dr. Cole was a biology major and member of Delta Tau Delta fraternity and graduated with honors in the Class of 1958. Dr. Cole served as the Norman E. Treves Professor of Biology at the College for more than three decades.

There is a lecture series named in his memory, as well as a prize that is given to the top student in biology.