home Membership Prize History Officers Phi Beta Kappa National
Founding of the Beta Chapter of Indiana
In the spring of 1898, six Wabash College faculty who were Phi Beta Kappa members petitioned the United Chapters of the Phi Beta Kappa Society to establish a chapter at Wabash. The names of these Professors were Joseph Tuttle, Robert King, Charles Tuttle, Donaldson Bodine, Addison Ewing and John Foster. On September 7, 1898, the National Council granted Wabash College a charter to become the 41st incorporated chapter of Phi Beta Kappa. On April 24, 1899, the chapter elected its first members from the Seniors. DePauw University became the Alpha Chapter of Indiana in 1889. The Greek initials for the society's motto, "Love of learning is the guide of life," form the name Phi Beta Kappa. 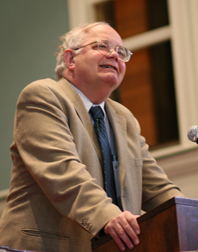 We remember Dr. William Placher, elected to Phi Beta Kappa in 1970.  Placher was the LaFollette Distinguished Professor in the Humanities at Wabash until his death on November 30, 2008. After earning his master’s degree and Ph.D. from Yale, he returned to Wabash to teach in 1975, and had taught and advised Wabash students for 34 years.  At a chapel talk honoring the 175th anniversary of the College’s founding, his words reflected the values of the Society: