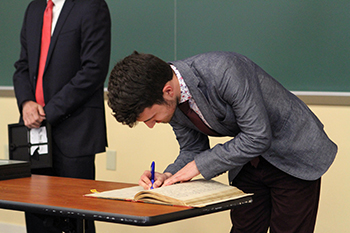 In evaluating grade averages of candidates, the college’s graduated four-point scale shall be used. Comprehensive Examinations are treated as equivalent to one and one-half credits, and rankings are assigned these values: Distinction, A (i.e., one and one-half course credits at 4 points); High Pass, B (3 points); Pass, C (2 points). In the case of multiple comprehensive examination results, the grades shall be averaged.

To be eligible for election, candidates from the senior class must have at least 20 credits of graded work at Wabash. Juniors must have 16 graded credits at Wabash. The by-laws permit the election of up to one-eighth of the senior class and one-sixteenth of the junior class. Those elected as juniors are counted in the quota of their graduating class.

To be eligible for Phi Beta Kappa membership, students should have incompletes removed from their records by mid-semester of the spring semester of their election year.

The Constitution and By-Laws of the Chapter states: “In addition to scholarship, good moral character will be a qualification of membership.”  We have usually interpreted issues of moral character to concern specific accusations of plagiarism or other impropriety.

Eligibility for election to membership shall be contingent upon fulfillment of the following minimum requirements. These stipulations concerning eligibility for membership were adopted by vote of the United Chapters and certified by the Executive Committee on behalf of the Senate of Phi Beta Kappa on June 1, 2011.

Stipulation 1.  Eligible students shall be candidates for a bachelor’s degree. The liberal arts encompass the traditional disciplines of the natural sciences, mathematics, social sciences, and humanities. Select courses in other programs of study may be included only if they unambiguously embody the liberal arts. Because Phi Beta Kappa honors excellence in the liberal arts, applied or pre-professional coursework shall not be considered in determining eligibility. This stipulation excludes professionally-focused courses and courses devoted to the acquisition of practical skills.  [Accounting courses will not be considered in determining eligibility.]

Stipulation 2.   Weight shall be given to the breadth and depth of study in liberal arts, taking into account the number, variety, and level of courses taken outside the requirements of the major, and the proportion of the candidate's overall program those courses constitute. Consideration shall also be given to the number of elective courses taken above the introductory, or general education, level. [Completion of a Wabash degree satisfies this stipulation.]

Stipulation 3.   Candidates shall have demonstrated, by successful work in high school or college, or in the two together, a knowledge of a second or non-native language at least minimally appropriate for a liberal education. In no case shall this mean less than the completion of the intermediate college level in a second, or non-native, language, or its equivalent. [Earning a passing grade in Chinese 202, French 202, German 202, Greek 201, Latin 201 or Spanish 202 at Wabash (including passing the course via the Credit/No Credit or Conversion to Credit/No Credit options) or via approved transfer credit satisfies this stipulation.  Concurrent enrollment will be considered for membership, but initiation is contingent upon passing the relevant course.  Students who are exempt from or test out of the Wabash language requirement will be considered to have fulfilled this stipulation. Placement in an advanced language course (e.g., 301 or 321) satisfies the stipulation.]

Stipulation 4. The candidate's undergraduate record shall include at least one course in college-level mathematics, logic, or statistics, with content appropriate to a liberal arts curriculum. The course should introduce the student to mathematical ideas, abstract thinking, proofs, or the axiomatic method. [Completion of the Quantitative Skills requirement satisfies this stipulation.]

Stipulation 5. In keeping with the Founders’ interest in fostering not only academic excellence but also friendship and morality, invitation to Phi Beta Kappa should be extended only to persons of good moral character. [We have usually interpreted issues of moral character to concern specific accusations of plagiarism or other impropriety.]