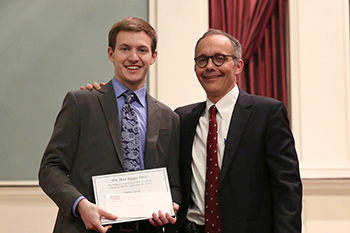 Each year the Wabash Chapter of Phi Beta Kappa awards a prize "to that undergraduate who is judged to have produced the most original and meritorious piece of work, whether artistic or analytical." The terms of the prize specify that it was "established to encourage work of high creative and scholarly merit, as distinct from proficiency in normal course work." Many winners have done their work on their own, in collaboration with a faculty member or another student, or as part of an extracurricular activity. Work completed as part of a course is also eligible, but the committee has usually expected work that transcended normal course requirements. Merely an "A" paper is not sufficient. This prize has been awarded to work as varied as published research, research projects, collections of poems or paintings, theatrical or musical performances, original musical compositions or films, public deliberation, and student journalism.