In his spare time, he trains to be a competitive power lifter, bench pressing, dead lifting or squatting hundreds of pounds of iron. 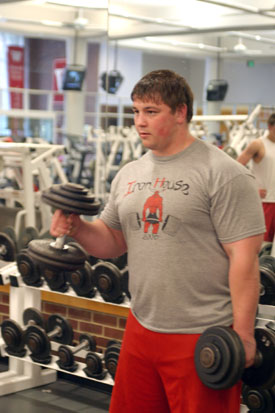 Yet Rogers does his most serious lifting in the classroom, where the 4.0 student masters the Greek language, talks philosophy and dissects the New Testament.

Rogers, a graduate of Clinton Prairie High School, was recognized for his academic prowess this spring when he was tapped for induction into Phi Beta Kappa, a national honor fraternity. More amazing, he enters the group as a junior, a rare feat.

"It’s a very significant honor for a junior at Wabash College."

Phi Beta Kappa is a collection of the top academic talent at universities and colleges around the country. The oldest American fraternity, it was founded in 1776 at William and Mary College for students of good moral character and exceptionally high academic accomplishment.

The Wabash chapter was established in 1898 and typically selects seniors whose grade point averages fall in the highest eighth of the class. However, on rare occasions, juniors are deemed worthy by a committee of faculty and staff and are tapped for induction.

"It means you are an extremely bright person," said Dr. David Kubiak, a professor of classics at Wabash who has worked much with Rogers. "If you put all the people in a room who were inducted into Phi Beta Kappa their junior years, you’d have a stratospheric IQ."

Election from the Wabash chapter was unexpected, Rogers said. He was unaware the committee was looking at him, and when the invitation came a month ago, he was taken by surprise.

"Of course it’s an honor to be in a national fraternity like that," he said. "It’s prestigious, especially to be named as a junior." 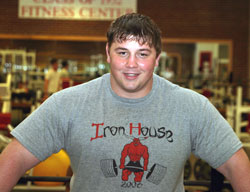 Rogers is majoring in Greek, studying to become a professor in religion and, specifically, the New Testament. He credits Clinton Prairie for stoking his interest in language, specifically pointing to Spanish teacher Carolyn McDonald for teaching how to approach linguistics.

He went to Wabash specifically because of its reputation in Greek and Latin, and it was in these classes where Kubiak first had Rogers as a student last year.

"He’s extremely bright, one of the most natural linguists we’ve had here," Kubiak said. "He’s not the least bit intimidated, he talks a lot and often has the right answers."

At the same time, Rogers was very impressed with Kubiak, a man he calls his mentor.

"There are certain fields of study that require vast language skills that Dr. Kubiak possesses," he said. "He’s just a brilliant linguist."

The two are familiar with each other in class, but also take the discussion outside the realm of the curriculum to tackle some difficult issues.

"Because he’s shown interest in the study of religion, we spend as much time talking religion as Greek," Kubiak said. "He’s extremely interested in theology.

"He seriously talks about very complex theological issues. He has a way of putting his finger on certain issues."

Wabash has just closed its doors for the year. Finals have been taken, dorms cleaned out and the campus is empty. While Rogers has just finished up his junior year, he already has his sights on next summer.

His goal this summer is to investigate graduate programs by the time school starts in August. The list has no shortage of prestige — Oxford, Princeton and University of Chicago are right up on top.

"My goal is to have five by the beginning of the school year," he said.

Trares is a reporter for the Frankfort Times. This story appeared in the newspaper's May 8th edition.