Alumni and friends were welcomed home this week as Wabash College celebrated Homecoming. 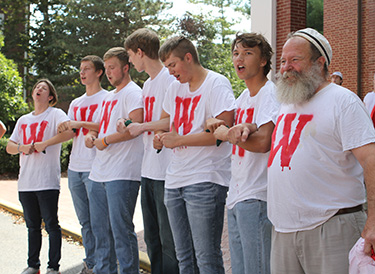 The weekend opened Thursday with Chapel Sing, one of the College’s most cherished rites of passage in front of Pioneer Chapel. Members of the Class of 2026 were tested on their knowledge of the words to “Old Wabash,” arguably the nation’s longest fight song. Their mastery was rewarded with the “painting in flashing glory” of their shirts by the Sphinx Club.

The 42nd LaFollete Lecture was hosted Thursday in Salter Hall. This year’s lecturer was Professor of Classics Bronwen Wickkiser with her talk, “Embodied.”

This lecture series was established by the Wabash College Board of Trustees to honor Charles D. LaFollette, their longtime colleague on the Board. A successful businessman, Mr. LaFollette was a devoted friend of the humanities and the arts. The LaFollette Lecture is given by a Wabash College faculty member who is charged to address the relation of his or her special discipline to the humanities, broadly conceived. 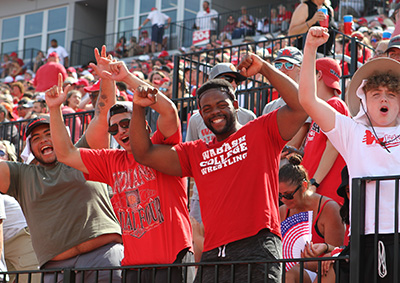 Saturday’s festivities kicked off with the annual Alumni Chapel in Pioneer Chapel. Celebrated in the spirit of Barney Hollett ’36, Alumni Chapel represents the general meeting of the National Association of Wabash Men, and is the time Wabash sets aside to honor Wabash men and women for their contributions to the College and their communities.

The Little Giants football team lost a down-to-wire battle with the Big Red of Denison. At halftime both the 2021-2022 basketball and wrestling teams were honored for successful seasons.