After two serious, pandemic-riddled years, the Wabash College Theater opens the 2022-23 season with a classic Shakespearean comedy, As You Like It, with performances Oct. 5-8 at 8 p.m. in Ball Theater of the Fine Arts Theater.

Free tickets should be reserved through the Box Office.

As You Like It is one of William Shakespeare’s most-performed comedies and follows Rosalind as she flees to the woods where she encounters a playbill’s worth of characters and eventually finds love. It’s a classic comedy that includes a wrestling match, hidden identities, deception, laughs, and a big, wild wedding.

“As I consider what we have gone through as a campus and community these past two years, it is high time to take a walk in the woods with a dear one,” said Director Heidi Winters Vogel. “This play invites us to escape the burden of politics, economics, conflicts, and artifices, and head out to nature.” 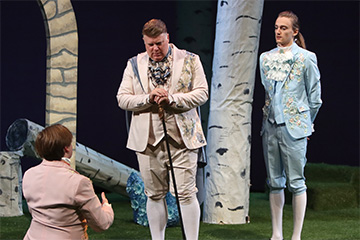 The Wabash production includes a slew of first-timers on the Ball Theater stage, including Ashutosh Mishr, who plays the leading lover, Orlando, who Rosalind pursues. The College is fortunate to welcome guest actress Shawnté Gaston as Rosalind (and later Ganymede), who is reprising her role from a recent production with the Indianapolis Shakespeare Company.

Orlando wins his wrestling match against Charles, which is quite a feat since Charles is played by Little Giant linebacker Jamari Washington. Still, Orlando knows his brother Oliver (Dario Banuelos) is out to get him, so he does what Prof. Vogel advises and heads “out to nature.”

And since it’s Shakespeare, Rosalind is at the exact same time banished to the woods along with her bestie, Celia (K’tren Wilson), sent there by the evil Duke Frederick (played by villainous professor, Dan Rogers). Just to keep things light, the court jester Touchstone (played by Drew Johannes), tags along with Rosalind and Celia – though both disguise themselves once they hit the trail.

As they arrive in the wilds of the Forest of Arden, the characters encounter a band of local shepherds and hunters who open their hearts to them. Hayden Kammer, who plays Jaques, gets all the great lines – like “All the world’s a stage” and “too much of a good thing.”

Most of the Wabash actors play multiple characters in the play, so the audience will need to keep a program handy to stay up with the mayhem. Prof. Vogel says, “These people are courtiers and country bumpkins and discover love in unfamiliar places and sometimes looking different than they expected. All the while wittily debating the weighty issues of power, gender, and romance.” 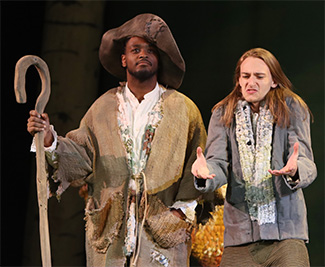 Forester; and Tiernan Lee Doran as Gaston, Forester, and Puppeteer.

The production also features veteran actresses Betsy Swift as Phebe and Julia Phipps as Audrey; as well as Modern Languages Teaching Assistants Morgane Cuoc as Eve and Chou Yu as Martext and Puppeteer.

The costumes – and there are many – were designed by Andrea Bear, who also designed and constructed puppets – lots of puppets, including sheep that look and act like they escaped from the Fellers' farm. Adam Whittredge is the scene designer, who constructed a set with a revolving stage and soaring trees. Logan Montgomery ’21 and David Vogel are the lighting designers and Cody Bevelhimer composed the music and is the sound designer.

Free tickets are available at the Fine Arts Box Office. Curtain times are 8 p.m. each evening, Oct. 5-8. The play is suitable for audiences of all ages.