The long-awaited 50th anniversary celebration of the Malcolm X Institute of Black Studies at Wabash College got off to a rousing start Friday night when over 120 alumni, students, faculty, staff, and trustees gathered to pay tribute to Dr. Robert Wedgeworth, Jr. ’59.

Alumnus Eugene Anderson ’83 announced that the library in the MXIBS will forever be named in Dr. Wedgeworth’s honor and a portrait painted by acclaimed artist Jay Parnell was unveiled to mark the occasion. 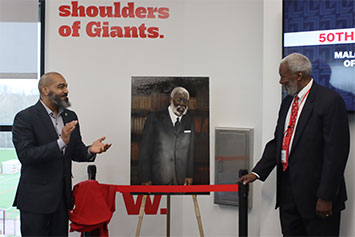 Dr. Wedgeworth was one of two Black students on campus when he matriculated in 1955, and he would go on to become one of the nation’s top figures in library science. Dr. Wedgeworth served as Dean of Library Science at Columbia University and later at the University of Illinois-Urbana Champaign, before founding an international literacy program, Proliteracy Worldwide.

“Bob is one of the greatest figures in the history of the Malcolm X Institute of Black Studies, though he was never a member,” Anderson said. Anderson described the countless ways Dr. Wedgeworth helped provide the foundation for the Institute, which was founded in 1970, and the many contributions he’s made to the MXIBS over the years.

Wabash President Scott Feller welcomed alumni from seven decades, who were joined 15 members of the Board of Trustees in attendance for the 50th anniversary celebration, which had been postponed twice because of the COVID-19 pandemic.

President Feller said, “I hope all of you fully participate in this weekend’s events, including the panel discussions, which will allow all of us who truly care about the MXIBS understand the struggles of our founders."