The Malcolm X Institute of Black studies has long been a place where generations of Wabash students could live and grow, and lean on each other as they navigated college and prepared for life’s challenges.

MXIBS alumni from seven decades returned to campus over the weekend to celebrate the Institute’s 50th anniversary, to honor the people who have made the MXI special, and to connect with the latest generation of students who continue to add to the legacy. 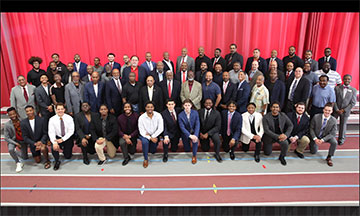 “It's important to be back, number one for the current students, but also because the of the legacy of the Malcolm X Institute,” said Eugene Anderson ’83. “It's been so helpful to all of us who've gone to Wabash. By honoring Horace Turner, Rob Johnson, Jasmine Robinson, all of those who paved the way for us, it was very important for me to spend some time with people I have not seen in a long time.”

That spirit of brotherhood was present as Anderson and others in attendance spent the weekend together attending panel discussions, a glee club concert commemoration the 50th anniversary, keynote addresses from alumni, and a banquet to cap the festivities.

The MXIBS was established to provide a home away from home for its members. Both the comments from panelists and questions from audience members agreed that the Institute has had an exceptionally positively impact on its members since its founding in 1970.

“The MXI was a huge part of why I succeeded at Wabash, having those relationships,” said Dale Rader ’94, an orthopedic surgeon in Statesville, North Carolina. “Whether it be the MXI, fraternity, or sports teams, everybody builds a community here. That's what helps you grow and conquer whatever comes your way. That carried throughout my life. It prepared me for life.”

Alumni appreciated the ability to engage with current students and recent graduates to find out what’s similar in the Wabash experience and what has changed.

“I think the Institute is in good hands,” said Keith Lee ’83. “There's an appreciation for the opportunities at the college. I heard a lot in the panel talks and I appreciate the opportunity to be one-on-one with professors. But I had to deal with all of these social and cultural factors that only the MXI was dealing with at the time. There's always been a need. I think people understand that the need is still here.”

Similarly, Anderson recognized the new set of challenges that current students face, but he was keenly aware of the benefits the MXIBS adds to the campus community.

“Certainly, coming out of this pandemic, they've experienced some things that we did not while here,” said the 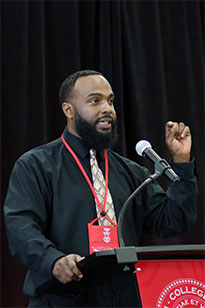 Lunchtime keynote speaker D.J. Singfield ’11 used the opportunity to address this group as a chance to pay it forward.

But he asked an essential question:

“As an educator, my definition of success is how many students can I help succeed,” he said in the address. “It's challenging, but meaningful work. Who are you going to help along the way? I can talk about these things because I’ve lived it. ‘Wabash Always Fights’ doesn't mean anything until you have to fight.”

What lies ahead is an effort to honor the legacy of Horace C. Turner H’76, the founding director of the MXIBS. At the evening banquet, Robert E. Knowling ’77 paid tribute to Turner and all of the Wabash men who have had a profound impact on his life. 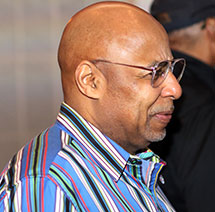 Anderson capped the night by announcing that the alumni gathered for the weekend had made a special commitment to building up the Horace Turner Legacy Fund, which provides for the needs and interests of the MXIBS, including special projects, programming, research, training, immersion learning, and support for individual members.

Joseph C. Mims ’76 generously committed up to $125,000 over a five-year period as a 1:1 match, to challenge alumni and friends of Horace and the MXIBS to give generously to this fund. Anderson announced that as of Saturday night, more than $200,000 had been pledged.

Alumni who would to make a gift or pledge to the effort can contact the Advancement Office at 877-743-4545 to talk with a member of the team.