Even when things were bleak – down 21 points after three possessions certainly qualifies – the Wabash quarterback never stopped telling his offensive line, receivers, backs, that things were going to be ok. Thompson was relentless in that belief early on.

“At that point, it’s just one play at a time,” Thompson explained. “We're not going to get it back all at once. There's no 21-point play. We say, ‘chop wood, one play.’ That’s our attitude for the whole game. One play. We’ve got to finish.” 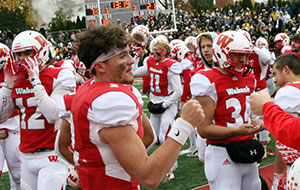 And the Little Giants finished strong. While the Wabash defense forced five punts and two turnovers in the final three quarters, the offense scored touchdowns on five of its last six possessions to earn a thrilling come-from-behind 42-35 win over DePauw in the 127th Monon Bell Classic.

“Liam is being trained for this,” he said. “They count on you at crunch time, and you have to have confidence, but you develop more confidence as you go along. It's all part of the process of being a leader, taking charge, dealing with adversity, and helping the other players.”

Thompson has been the driving force offensively all season, as the Little Giants led the North Coast Athletic Conference in points scored (38.3 ppg), total offense (487.1 ypg), passing (295.6 ypg), and rushing (191.5 ypg) this season.

How good has the sophomore been in 2021. He ranked second in the NCAC with 2,956 passing yards and tied for the league lead with 28 passing touchdowns.

When adding in his rushing, it’s apparent the product of Indianapolis’ North Central High School affects the game with his right arm and his legs. Thompson averaged better than 41 yards per game on the ground and his nine rushing TDs tied for second among all NCAC rushers.

All told, Thompson accounted for nearly 350 yards of total offense per game.

The 6-foot-1 team captain has been on a roll for the 2021 campaign, a run that dates back to the summer when he served as a counselor at the prestigious Manning Passing Academy in Thibodaux, Louisiana. That role facilitated Saturday’s visit by the elder Manning. 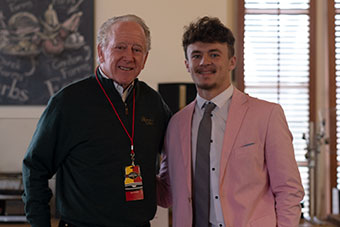 The rhetoric major was one of only three non-Division I quarterbacks among the 46 invited counselors.

He used that experience to his advantage right away in the Little Giants’ season-opening, 10-point road win at Rose-Hulman, accounting for a then-career high 340 yards passing and three TDs to go with 87 yards rushing and another score.

For those heroics, Thompson was named the NCAC Player of the Week and the first Manning Passing Academy Honor Roll honoree of the season.

He accounted for 12 touchdowns in Wabash’s first three games of the season and saw that productivity continue, amassing 14 total TDs in the last four contests. That included four TDs Saturday against his school’s arch rival. 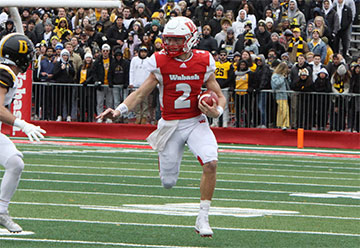 “Liam is a team captain and he’s very athletic,” Manning stated, “but it’s more than being athletic. There is a cerebral part in that leadership and really what's in his heart. Wabash is very fortunate to have him. Great things are in store for Liam and his teammates.”

While the Monon Bell victory helped the Little Giants win seven games and achieve one of its goals, Thompson is already focused on what’s ahead.

“This win is one where we can get some momentum,” Thompson said, “and start our offseason on a high note. We definitely have some positives going into next year.”