Staring at a 21-point deficit in the first quarter, Wabash was going to need contributions from almost everyone to dig itself out of that hole.

Led by a potent ground game, Wabash got that and more as the Little Giants scored 14 points in each of the last three quarters to reel in its rival in a 42-35 win Saturday in the 127th Monon Bell Classic.

“We were beating ourselves to at the beginning of the game,” said quarterback Liam Thompson. “We spotted them 21 points and didn't help ourselves out much. If we just continued to chop wood, to chip away, I knew we'd be alright.” 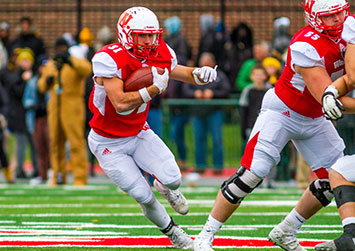 Wabash amassed 232 yards rushing – including 137 from sophomore Donovan Snyder – got two touchdown catches from tight end Jackson Clayborne, and scored on four of five drives in the second half to beat DePauw for the tenth time in the last 12 meetings.

“The running backs and the O line, we've leaned on them all year,” said the sophomore from Indianapolis. “We lean on those guys every game and almost expect them to make drives like that. They did today multiple times. I’m really proud of all those guys, like Donovan and Cade, for making plays.”

Snyder and teammate Cade Campbell took tuns toting the ball and wearing down the DePauw defense. The duo combined for 14 carries and 105 yards in the fourth quarter alone against a Tiger defense that allowed an average of 100 rushing yards per game this season.

Three plays in the decisive final quarter turned the tide for the Little Giants. Two came from the running backs.

Snyder scored on a 37-yard run with 12:19 to go to give Wabash its first lead. After the Little Giant defense forced a punt, Campbell ripped off a 29-yard run on third-and-three at the DePauw 37-yard line to set up a first and goal.

Snyder had a feeling those long runs would come.

“It was same as the 20 runs we ran before,” he said. “The line was just able to hold up a little bit longer, and I was able to bust 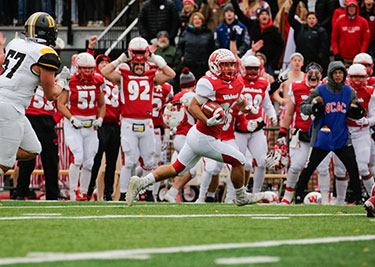 it. You have to treat them all the same and run as hard as you can each one because you never know which one's going to be the one to bust.”

The clincher came four plays later when Clayborne snagged a jump pass from Thompson on fourth-and-goal from the one. It was a play the team had worked on all week in practice.

“When Coach Morel calls plays, they normally work, especially in crunch time,” Clayborne said. “I was excited when he called it, and, you know, it ended up working.”

The TD capped a stellar day for the senior from Springfield, Ohio, who had four catches for 38 yards and two scores.

Few Little Giants felt as good afer the game than senior offensive lineman Dane Smith, who took pride in his unit’s drive to secure another Monon Bell victory. Clinging to a six-point lead with 10:32 remaining, Smith and the offensive line trotted out and cleared a path for a 14-play, 87-yard drive that ate up more than eight minutes of clock and was ended by Clayborne’s second TD. 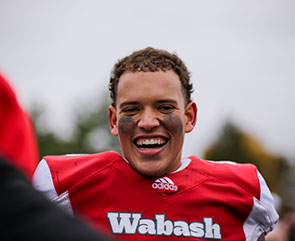 “However much time we had left there on the clock, we were just chipping away, going play by play,” he said. “It means the world to me that our guys up front really worked hard and got it done today.”

Smith, who helped build Little Giant Stadium while interning in 2020 with Wilhelm Construction, was happy to deliver the first Monon Bell win on Frank Navarro Field and return the Bell to the Wabash community, especially since the 2020 edition was wiped out by the pandemic.

“The Bell will stay in Crawfordsville for the next year and it will ring for the next few weeks,” Smith said through a huge smile. “Bringing the student body and our community something that's such a vital part of our campus is an incredible way to end my career.”