The Wabash College football team fought back from a 21-0 first-quarter deficit and outscored DePauw University 42-7 over the next 46 minutes to win the 127th Monon Bell Classic, 42-35, in front of a sold-out Little Giant Stadium crowd of 8,400. 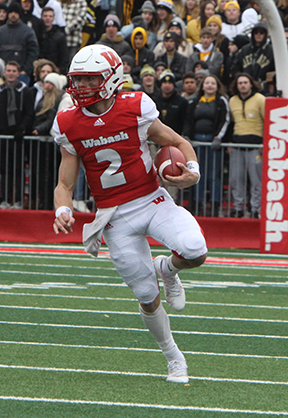 DePauw came into the game with an eight-game winning streak and conference championship and appeared to be cruising to another win with three touchdowns in the first 13 minutes, which silenced the homestanding Wabash crowd – starved for a Bell Game after last year’s game was canceled.

But with the fans chanting “Wabash Always Fights,” it was game-on in a thrilling Little Giant victory.

“This was just a great example of the toughness and the grit that our players and our student body have – it’s what we teach here,” said Head Football Coach Don Morel, who rallied the students in Chapel on Thursday, calling for “some Monon Bell Magic.”

Sophomore quarterback Liam Thompson dialed up some of that magic when he hit tight end Jackson Clayborne for 18 yards to set up a one-yard quarterback sneak to cap a 75-play drive that got Wabash on the scoreboard and the crowd into the game.

Leading 21-7, the Tigers marched straight down the field on the Little Giants, but senior Kamron Ferguson intercepted a Chase Andries pass at the Wabash seven yard-line to kill the drive.

Two drives later, Thompson again had Wabash on the move, hitting Derek Allen for gains of five and 26 yards and Clayborne for nine more. With 8,400 fans expecting Thompson to sneak it in from the one-yard line with 47 seconds left in the half, he faked the run and handed off to Heisman Skeens for a jet sweep touchdown run, and Wabash was within seven, 21-14.

Thompson said the team made very few adjustments at halftime. “We had a little momentum coming into halftime, it was 21-14, so energy was really high,” he said. “We just tried to stay even keel the whole game, chop into the lead, and figured eventually they’d make a mistake and we’d capitalize, which we did.” 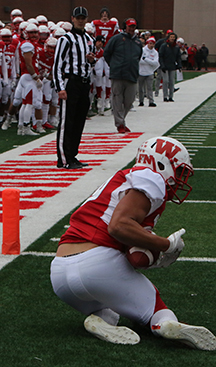 Still, Andries and DePauw fired up the visiting crowd when they took the opening kickoff of the second half 72 yards to go up 28-14. Andries completed seven passes on the drive, including a high-flying, acrobatic catch by Jaylon Smith at the one yard-line, and Gus Baumgartner ran it in from there.

The rest of the third quarter belonged to Wabash. The defense tightened up and the running game got rolling.

“We just had to stop shooting ourselves in the foot,” Thompson said. “We knew that if we came in and played our game, we could hang with anybody.”

Wabash answered the Tigers with a nifty 75-yard drive that ended when Thompson found Skeens streaking across the field at the 14 yard-line and the speedster took it in for a 20-yard touchdown and Wabash was within seven, 28-21.

The defense forced a quick three-and-out on the next series, and Thompson wasted no time pulling Wabash even at 28-all. He hit sophomore Derek Allen for a 31-yard bomb, picked up another 15 yards on a DePauw roughing the passer penalty, and bought time with his feet to allow Clayborne to get open for a 10-yard touchdown grab. 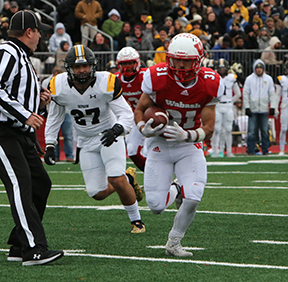 The Wabash defense got physical and forced the Tigers into a three-and-out on their next two possessions. Four plays later, Wabash had its first lead of the game when sophomore Donovan Snyder ripped off a 37-yard touchdown run. Jake Handley missed the extra point, his only miscue of the day, and Wabash led 34-28 with 12:19 to play.

DePauw got one first down on its next drive before punting, and Wabash took over at its own 13 yard-line with 10:13 to play and a six-point lead. Coach Morel stuck to his game plan – run the ball and pass when necessary. The Wabash crowd roared with every first down as the clock ticked, ticked, ticked down.

When sophomore Cade Campbell made three cutback moves for a 29-yard gain to get Wabash to the Tigers’ eight, it looked like the game was in the bag. But DePauw’s defense stiffened and Coach Morel faced a huge call with fourth down at the DePauw one yard-line. A field goal would have put Wabash up by two scores, but always the gambler, and believing in Monon Bell Magic, Coach Morel went for it. Thompson faked the run and lifted a soft jump pass to Clayborne in the endzone and the victory celebration had begun.

That game-cinching drive was classic Wabash: 14 plays, 87 yards, and over eight minutes of clock.

Andries and DePauw raced down the field for a late touchdown with :44 left to end a long scoring drought, but Wabash covered two onside kicks to seal the game and Wabash’s 15th Monon Bell victory since 2001. Wabash now leads the all-time series 63-55 with nine ties.

Thompson overcame an early interception to hit 14-of-24 passes for 163 yards, while rushing for 44 yards. Snyder jump-started the Little Giants’ second-half comeback, finishing with 137 yards rushing and a touchdown. Wabash rushed 53 times for 232 yards, which helped the Little Giants gain a six-minute edge in time of possession. 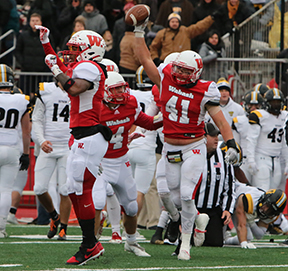 Senior Josh Myers played the game of his life in his last Bell-ringer, making a dozen tackles, while the big guys up front – Dave Marsh, Will Olive, Steven Thomas, and Seth Buresh—combined for nine tackles and two sacks. In addition to his game-changing interception that ended a would-be Tiger touchdown, Ferguson added another pick at the end of the first half to prevent another score.

Thompson credited his teammates on defense for keeping Wabash in the game. “All year the defense has been doubted, but they kept us in the game when the offense was struggling,” he said. “It was awesome to see those guys come up with the stops when we needed them.”

Wabash finished the season 7-3 overall and 6-3 in the North Coast Athletic Conference.

“At Wabash it’s weird because you can win every game and lose the Bell and it’s not a perfect season or you can lose every game and win the Bell and there’s something to cheer about,” Thompson added. “It’s a rare opportunity we have here. No matter what the records are at the end of the year, we get to play in this game, so we’re just really blessed to get the win.”