Dr. Scott E. Feller was inaugurated as the 17th President of Wabash College in an on-campus ceremony Friday, October 8.

The College’s Board of Trustees elected President Feller in May 2020, but COVID-19 forced the postponement of his formal inauguration. 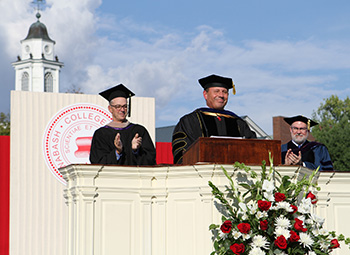 “We are genuinely excited to officially welcome Scott Feller to the presidency of our College,” Jay Allen ’79, Chair of the Wabash Board of Trustees, said ahead of the inauguration. Allen presented a copy of the College’s original charter to the new president of the College, both as a symbol of the integrity of the institution and the confidence we place in him.

“Scott has served Wabash in virtually every capacity since he and Wendy arrived on campus in 1998,” Allen said, “and we are proud of his leadership as our 17th president – particularly in such difficult times.”

Dr. Feller was inaugurated in Little Giant Stadium Friday afternoon at a ceremony that was attended by students, faculty, staff, alumni, trustees, delegates from over a dozen institutions, and members of the President’s family.

“Wabash has been my home for over 20 years and few college presidents have the benefit of such a long association with the institution they lead,” said Dr. Feller. “I come to my office every day thankful for the relationships I have developed here and an appreciation for what Wabash means to its students and alumni.”

Dr. Feller becomes the first person to rise directly from the faculty to the presidency since Byron K. Trippet was elected president in 1956. Feller has served Wabash as the Lloyd B. Howell Professor of Chemistry, Chemistry Department Chair, Chair of the Division of Natural Sciences, and Dean of the College. 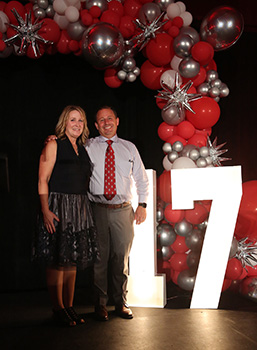 “Scott’s roll-up-his-sleeves approach to tackling challenges and his deep analytical skills, together with his ability to establish trust-based and respectful relationships with his colleagues, faculty, students, alumni, parents, foundations, and other supporters of Wabash, uniquely qualify him to be an outstanding president of our College,” Mr. Allen added.

In his first 15 months in office, President Feller guided Wabash through a full year of residential education during the peak of the COVID-19 pandemic, and initiated a careful plan to ensure the health and safety of the College. He secured a $4.5 million grant from Lilly Endowment Inc. for a broad range of student success and inclusivity programs entitled “Restoring Hope, Restoring Trust,” and the College set all-time records for its Day of Giving and Annual Fund during President Feller’s first year.

“President Feller, we wish you the best of luck in these years to come. Your commitment to Wabash is evident to me and my Wabash Brothers,” Student Body President Daniel Bass said during the inauguration celebration.

“President John Quincy Adams once said, ‘If your actions inspire others to dream more, learn more, do more, and become more, then you are a leader.’ President Feller, you have done just that. You continue to inspire Wabash students to think critically, act responsibly, lead effectively, and live humanely. I look forward to the years of success and accomplishments that Wabash College will achieve under your presidency.”

Inauguration Weekend festivities included the fall meeting of the Wabash Board of Trustees, the formal inauguration ceremony, an inaugural gala, and a tailgate party prior to the Wabash football team’s game against Oberlin College.