The Little Giants took an early 6-0 lead when Josh Boyer's move late in his 125-pound bout against Chris Head ended in an injury default. The Crimson Wave responded with three straight victories at 133, 141, and 149 pounds and had a lead heading into the final period of the 157-pound match.

Sophomore Tony Conway scored a late reversal in the 157 bout to after tying the match at 2-2 to give Wabash the 4-2 victory and tie the overall scoring at 9-9.

"That was a great win for Tony," head wrestling coach Brian Anderson said. "We were geared up for that match because he was wrestling one of Calumet's top guys. Tony just stuck with it, he didn't falter at all and kept moving forward with his game plan. It worked out in his favor at the end." 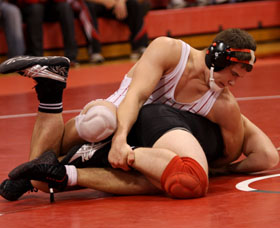 Sophomore Greg Rhoads added to the score by recording a major victory at 184 pounds with a 12-4 win over Dustin Boyd. A forfeit victory by Wabash wrestler Michael Burke put the Little Giants in front 31-9 heading into the final bout of the night.

Senior Rob Arnett picked up the final four points for Wabash with a 16-7 major victory at heavyweight to move the Little Giants to 4-1 in dual meets for the season after going 3-1 Saturday at the Lakeland Duals.

"I was definitely pleased with the team effort tonight," Anderson said. "There were some tight matches. We knew Calumet was going to be solid despite the fact they are a first-year program. They have a lot of good wrestlers in their lineup.

"We came out well. We definitely dropped a couple of matches I expected us to win, but overall it was a good effort."