The grant from the FACE Foundation (French-American Cultural Exchange) and Villa Albertine will bring the Albertine Cinémathèque French Film Festival to campus Jan. 30 through March 27. The festival is a program of FACE Foundation and Villa Albertine made possible with the support of the Centre National du Cinéma et de l’Image Animée (CNC), and SACEM/Fonds Culturel Franco-Américain, the French American Cultural Fund.

The festival spotlights seven films with each addressing global and contemporary issues central to the exploration of the humanities at Wabash. The selected films are designed to expand access to French cinema and support film programming at American colleges and universities. The selections engage with the current issues, while nurturing an enduring love for this diverse and evolving art form. 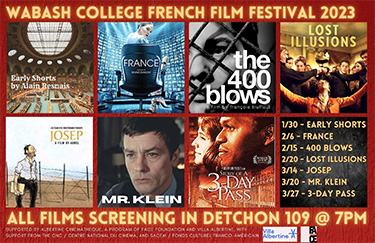 “We are delighted that the Wabash campus and its surrounding community will benefit from this generous grant,” said Karen Quandt, BKT Assistant Professor of French. “Aside from being richly packed with legendary cultural references (Balzac, Gauguin, Van Gogh, Resnais, Truffaut), the festival will also give our community the opportunity to reflect upon current issues involving the media, social justice, anti-Semitism, and race. We are grateful to Albertine Cinémathèque for supporting this important opportunity.”

Wabash is one of 50 institutions nationally presenting the festival.

The FACE Foundation is a U.S. non-profit organization dedicated to supporting French-American relations through innovative cultural and educational projects. In partnership with the Cultural Services of the French Embassy in the United States, FACE Foundation promotes artistic, literary, and educational exchange, and collaboration between creative professionals from both countries. Villa Albertine, an initiative of the French Ministry for Europe and Foreign Affairs, with support from the Ministry of Culture and French and American private and public donors, aims to build a community for arts and ideas between France and the U.S.

“All the World’s Memory”

This recently restored early short by French New Wave director Alain Resnais (perhaps best known for “Hiroshima Mon Amour”), pays homage to the National Library of France. For centuries, the library has served as a repository for all the country’s publications, and more: Maps, prints, comic books, priceless manuscripts, gems, and medals all form part of the collection. Much like Susan Orlean’s “The Library Book,” All the World’s Memory takes us on an impressive and impressionistic tour, from the reading rooms, to the stunning architecture, to the stacks and the physical plant. We also accompany a new arrival to the library, a recently published book, on its journey from reception to cataloguing to the moment it takes its place on a shelf, joining millions of other items that have made their home here for centuries. At the intersection of artistic and informative, All the World’s Memory is a unique look at the effort to catalogue as much knowledge as possible in one of the world’s great libraries.

In 1937, Spanish nationalists called on Nazi and Italian Fascist forces to bomb the Basque town of Guernica. The horrors of the bombing led Pablo Picasso to create perhaps his greatest work, “Guernica,” a massive painting powerfully representing the horrors of war. Recently restored and digitized, Guernica is a short film featuring paintings, drawings and sculptures made by Picasso between 1902 and 1949. Accompanying the artworks is a dramatic piece by surrealist poet Paul Eluard, read by actor Maria Casares. In the first few minutes of the film, Picasso’s deeply human drawings evoke daily life. Then comes the bombing, with lives shattered and destroyed. Here, the focus is on Guernica itself, as the film spotlights details of the painting over a frenzied and disturbing score.

Paul Gauguin uses the artist’s own writings and artwork to trace his creative journey. The film begins with Gauguin losing his job in finance—the catalyst for his commitment to paint every day—and continues through to his final days in Tahiti. After leaving Paris, Gauguin settles in Brittany, where he is inspired the landscape and the locals. In the sound of their clogs, he writes, “I hear the muffled, dull, powerful sound I seek in my painting.” After a time though, Gauguin, miserable and impoverished, sets off for Tahiti. Here, he would create the paintings that would bring him lasting fame, but near the end of his life he considered his Tahitian sojourn a “crazy sad adventure.”

Recently restored, this 1948 boundary-pushing short brilliantly evokes the life of Vincent Van Gogh, using only his paintings as visuals. Van Gogh traces the great painter’s life and work, from his early days as a realist in the Netherlands, to his stay in Paris, the peak of his career in Provence, and then the dark days of madness that descended on him.

Léa Seydoux brilliantly holds the center of Bruno Dumont’s unexpected, unsettling new film, which starts out as a satire of the contemporary news media before steadily spiraling out into something richer and darker. Never one to shy away from provoking his viewers, Dumont casts Seydoux as France de Meurs, a seemingly unflappable superstar TV journalist whose career, homelife, and psychological stability are shaken after she carelessly drives into a young delivery man on a busy Paris street. This accident triggers a series of self-reckonings, as well as a strange romance that proves impossible to shake. A film that teases at redemption while refusing to grant absolution, France is tragicomic and deliciously ambivalent—a very 21st-century treatment of the difficulty of maintaining identity in a corrosive culture.

from home, steals things, and tries (disastrously) to return them. Like most kids, he gets into more trouble for things he thinks are right than for his actual trespasses. Unlike most kids, he gets whacked with the big stick. He inhabits a Paris of dingy flats, seedy arcades, abandoned factories, and workaday streets, a city that seems big and full of possibilities only to a child’s eye.

Lucien is a young unknown poet in 19th-century France. He has great expectations and wants to forge a destiny. He leaves the family printing business in his native province to try his luck in Paris, on the arm of his protector. Soon left to his own devices in the fabulous city, the young man will discover the backstage of a world dedicated to the law of profit and pretense. A human comedy where everything is bought and sold, literature as well as the press, politics as well as feelings, reputations as well as souls. He will love, he will suffer, and survive his illusions.

939. Spanish republicans are fleeing Franco’s dictatorship to France. The French government has built concentration camps, confining the refugees, where they barely have access to hygiene, water, and food. In one of these camps, separated by barbed wire, two men will become friends. One is a guard, the other is Josep Bartoli (Barcelona 1910 – NYC 1995), an illustrator who fights against Franco’s regime.

A spellbinding modernist mystery that puts a chilling twist on the wrong-man thriller, Alain Delon delivers a

standout performance as Robert Klein, a decadent art dealer in Paris during World War II who makes a tidy profit buying up paintings from his desperate Jewish clients. As Klein searches for a Jewish man with the same name for whom he has been mistaken, he finds himself plunged into a Kafkaesque nightmare in which his identity seems to dissolve and the forces of history to close in on him. Met with considerable controversy on its release for its portrayal of the real-life wrongdoings of the Vichy government, this haunting, disturbingly beautiful film shivers with existential dread as it traces a society’s descent into fascistic fear and inhumanity.

Monday, March 27: “La Permission (The Story of a Three-Day Pass)”

Melvin Van Peebles’s edgy, angsty, romantic first feature could never have been made in America. Unable to break into a segregated Hollywood, Van Peebles decamped to France, taught himself the language, and wrote a number of books in French, one of which, “La permission,” would become his stylistically innovative feature debut. Turner (Harry Baird), an African American soldier stationed in France, is granted a promotion and a three-day leave from base by his casually racist commanding officer and heads to Paris, where he finds whirlwind romance with a white woman (Nicole Berger)—but what happens to their love when his furlough is over? Channeling the brash exuberance of the French New Wave, Van Peebles creates an exploration of the psychology of an interracial relationship as well as a commentary on France’s contradictory attitudes about race that is playful, sarcastic, and stingingly subversive by turns, and that laid the foundation for the scorched-earth cinematic revolution he would unleash just a few years later with “Sweet Sweetback’s Baadasssss Song.”