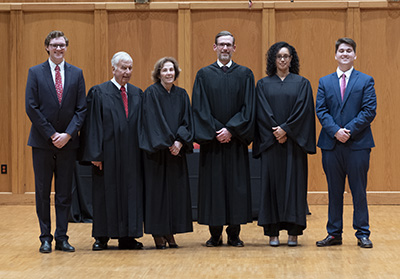 Buckley, a senior from New York City, is a political science major and Spanish minor. He is a member of Pre-Law Society, College Democrats, Glee Club, and Phi Gamma Delta.

It’s a tremendous honor, and one I never thought I was capable of when I first sat in the audience at the finals my freshman year,” Buckley said. “I’m incredibly grateful to the people who make this program possible. It has been one of the highlights of my Wabash experience.”

Kirkpatrick is a junior from South Bend, Indiana. He is a double major in rhetoric and political science with a minor in Spanish. He is active as vice president of the Pre-Law Society, treasurer of La Alianza, a democracy fellow with WDPD, and justice of the Wabash College Student Body.

“Being declared winner was one of the most rewarding feelings,” Kirkpatrick said. “I spent about 60 hours studying this case, so I was happy to know that my hard work paid off. The experience has made me excited for law. I plan to participate again next year.”

The Wabash College Moot Court is a partnership between the Wabash Club of Indianapolis (formerly known as the Indianapolis Association of Wabash Men) and the rhetoric department. Each year student-advocates are chosen to represent either the petitioner or respondent to an adapted court case. Each has 12 minutes to present their cases in front of a panel of judges while being interrupted and challenged with questions along the way.

This year’s case addressed whether persons born in United States territories are automatically U.S. citizens with the rights of citizenship.

“The competition began in September when students received access to this year’s challenging legal problem,” said Associate Professor of Rhetoric Jeff Drury, the organizer of the 29th Moot Court. “The students read the document thoroughly, learned the facts and legal basis behind the problem, developed a cogent case, and prepared oral arguments for delivery.”

There were 35 preliminary participants. Of those, 13 advanced to the semi-finals, then four to the finals.

The preliminary judges included a long list of Wabash alumni and friends. The judges for the final round were the Honorable James Patrick Hanlon, the Honorable Margret G. Robb, A. Vincent Buzard ’64, and Professor Sabrina Thomas.

“You did an amazing job of being poised,” said Hanlon, addressing the student-advocates. “You were not thrown off by the questioning. You answered in a responsive way and then turned right back to where you wanted to go.”

“As an appellate judge, it was hard for me to remember you were not actually lawyers arguing in my court,” she said. “I thought you handled questions amazingly well.”

After an hour of back and forth with the students, the judges came to the consensus that two student-advocates rose to the top.

“The fact that we had co-winners this year indicates the strength of the field and their level of preparation,” said Drury.

In addition to Buckley and Kirkpatrick being named co-winners of the top prize, Jackson Grabill ’24 was awarded the Floyd Artful Advocacy Prize. Jakob Goodwin ’23 rounded out the top four finalists with William Grennon ’24 being the alternate.

“Wabash is one of the few schools in the country with an undergraduate moot court program,” Drury concluded. “It’s a wonderful opportunity for students to hone their advocacy skills and network with alumni.”