Named for former Wabash Head Football Coach Frank Navarro and his wife, Jill, the scholarship will award $10,000 to six Pell Grant recipients each year. The additional financial aid meets needs not covered by outside grants and scholarships.

In addition to selecting six incoming freshmen to individually receive the Navarro Family Scholarship, the College will work to promote the scholarship among qualified prospective students in each successive year with the goal of growing a support network between students with similar backgrounds who may face socioeconomic barriers to earning their college degree. Over the past several years, Wabash has invested resources into increasing access, retention, and graduation of young men, in particular from traditionally underrepresented populations in higher education.

“We see the future of Wabash College in our third century as intricately linked to our ability to recruit, retain, and graduate students from traditionally underserved populations,” said Feller. “The Frank and Jill Navarro Family Scholarship will provide essential support to Pell Grant recipients. We look forward to providing opportunities for these students to engage in the fullest Wabash experience, including co-curricular programs, mentoring, internships and career services.”

The group represents three states, four of the six were team captains, and one has participated in a three-week study abroad program in Portugal studying aquatic ecosystems. Collectively, these scholarship recipients have identified academic areas of interest in fields including biology, business, pre-law, pre-med, and psychology.

Navarro served as head coach of the Wabash football team from 1974-77, amassing a 26-17 (.605) record in those four seasons. He guided the 1976 Little Giants to a 7-3 record, the program’s first winning season in 11 years. A year later, his charges posted an 11-2 mark, earned the first NCAA Playoff berth in school history, and advanced to the Amos Alonzo Stagg Bowl, the NCAA Division III national championship game. For his efforts, Navarro earned the Eastman Kodak-American Football Coaches Association College Division Coach-of-the-Year Award in 1977. In September 2021, the playing field at the newly dedicated Little Giant Stadium was named “Frank Navarro Field” in his honor. Covering 22 seasons as a head coach at four institutions, Navarro posted a career record of 99-99-6 (.500). 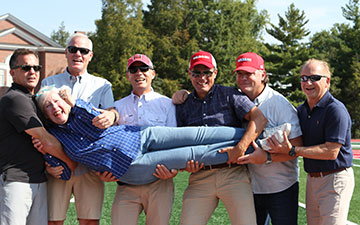 Frank and Jill Navarro have eight children, 22 grandchildren, and three great grandchildren. He entered the real estate business with his sons after retiring from coaching and passed away in May 2021 at the age of 91.

Wabash has a historic commitment to recruiting and graduating young men of great promise and high financial need. The College also has a legacy of graduating students who are the first in their family to graduate from college and for whom – without generous scholarships and financial aid – could have never attended a four-year college or university. 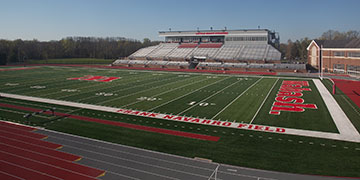 While the scholarship celebrates the connection of the Navarro family to Crawfordsville, the College will cast a wide and strategic net to identify promising Navarro Scholars across the country.

Wabash offers 27 majors and 31 minors to nearly 900 students from diverse economic, social, and cultural backgrounds. Nineteen percent of Wabash students self-identify as domestic students of color; 29% identify as first-generation students; and 99% of all students receive financial aid, with 27% qualifying for federal Pell Grants.