Coleman, a native of Muncie, Indiana, was a four-year member of the Wabash football and track and field teams and served as a captain on the gridiron. He helped the Wabash football team to a 7-3 record in 2021, playing in a career-high eight games for the Little Giants as a defensive lineman. He totaled 4.0 tackles, including two tackles for loss and one sack. He also registered one quarterback hurry. 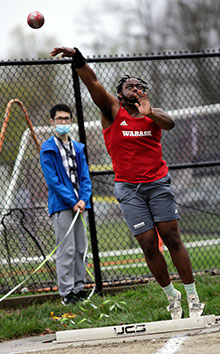 A rhetoric major, Coleman is a member of the Malcolm X Institute for Black Studies (MXIBS), where he has served as chairman and secretary. He also helped restore the Bethel AME Church in Crawfordsville, and served as a resident advisor on campus.

“Kenny is a phenomenal young man and leader,” said, Clyde Morgan, Wabash director of track and field and cross country. “He leads effectively on the track and field team, on the campus, and in his community. He is the epitome of our MOWNBU motto (Men of Wabash Nothing Breaks Us), and I would gladly take ten of that young man.”

He’s a four-time Dean's List honoree, and was the 2021 recipient of the Lewis Salter Memorial Award, which is given to the member of the junior class who best exemplifies the characteristics of scholarship, character, leadership, and service, the Nicholas McCarty Harrison Essay Award, the Wedgeworth Lilly Library Research, Scholarship, and Creativity Award, and the MXIBS Service Award. Coleman earned an Orr Fellowship from the State of Indiana and will receive executive mentorship and participate in a curriculum designed to develop understanding and skills vital to entrepreneurship and business leadership.

Eaton, a native of Munster, Indiana, played in 42 games in his collegiate career as a midfielder and served as a team captain. He collected career highs of five assists and seven points on 33 shots as a senior, while notching a career-best four goals as a junior.

He was actively involved on campus as a Peer Career Adviser for Wabash Collee Career Services and as a Wabash Ambassador in the Office of Enrollment Management. He founded the Wabash Think Tank, a student organization that works to host open discussions on a wide variety of topics to encourage discussion outside of the classroom, served as a Latin tutor, and was a member of the Wabash COVID Action Response and Education (CARE) Team, where he worked with a group of peers to ensure COVID-19 rules from the college were enforced and campus health is maintained. 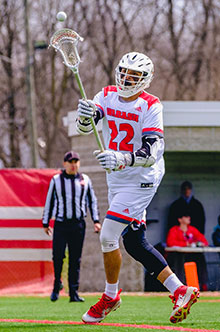 “Jeremiah is involved in everything,” said Chris Burke, Wabash head lacrosse coach. “He’s driven, has a good head on his shoulders, and understands the value of priority, sacrifice, and teamwork. He is a leader who pushes everyone to be better and is passionate in all that he does.”

Since 1992, Arthur Ashe Jr. Sports Scholars have demonstrated stellar athletic ability and academic performance (3.5 cumulative GPA or higher), in addition to a commitment to community service and student leadership. The award is Inspired by tennis legend Arthur Ashe Jr.'s dedication to education as well as his love for the game of tennis.