Where Is Our Beloved Community Runs Through Sunday A little over a year ago, a glass bottle crashed through a residence hall window – through a pane that had a Black Lives Matter poster on it – into a room housing Black students.

The repercussions of that incident can still be felt today in all corners of the Wabash College campus, but perhaps more than anything, the events of that night helped focus a spotlight on what it means to be a racial minority on the Wabash campus.

When the curtain rises in Ball Theater this week, the Wabash Theater Department will ask a fundamental question: Where Is Our Beloved Community? 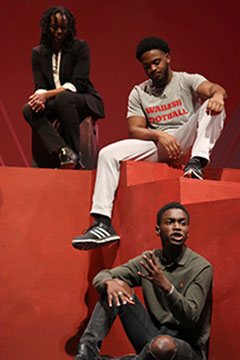 In five performances running Wednesday through Sunday, real stories will be shared about what it’s like to be the only student of color in class; how it felt to see shards of glass scattered across the floor of your dorm room; what it means when someone assumes you are Chinese when you are Korean or Mexican when you are Nicaraguan.

“I got this idea from class last spring when a student started talking about the incident,” says the production’s director, Heidi Winters Vogel. “It was important and useful to hear how he was feeling. When there was a call for Equity and Inclusion Fellows, I thought we might use that as an opportunity to gather stories like these and make a play about them in an attempt to provide understanding; to answer the question, ‘Where is our beloved community?’”

That kernel of an idea took shape and not long after the start of the spring semester, Professor Vogel, along with seniors Sammy Lebron and Sebastian Wang, started collecting stories. Lots of them. And those stories – personal experiences and feelings of anger, heartbreak, and frustration – came from students, staff, faculty, and alumni.

“There was a huge range of sentiment shared,” Vogel said, “from, ‘Hey, Wabash is the best possible place for me to be,’ to ‘I don’t feel heard and I don’t belong here.’ This took us on a journey to use these stories to create a script.”

Because these are real experiences of real Wabash people, it’s taken some heavy lifting to get to a place where they can be shared with the larger community. The cast and production crew talked about how to communicate the stories without making them an attack on certain people or, perhaps worse, an attempt to provide salve for still-healing wounds.

Nearly all of the 28 people who shared their stories will be identified by name and video clips of the interviews conducted with them will be woven into the fabric of the theatrical piece. Instrumental music performed by Robert Borland will underscore and link the individual stories.

“Our goal with this production is to give the audience a sense of deep listening – without judgment,” Vogel added, saying she hopes the audience will think about how each of us can play a role in building this community. “As a White woman, I have to step up and listen – and recognize that things are not always as I perceive them.”

The journey, though, from lived experiences to creative performance has taken time, patience, and most of all trust. Professor Vogel says that participants broke up into pairs and small groups to build the trust necessary to share and understand their stories. There were regular check-ins to make sure everyone was comfortable; to make sure everyone was listening and understanding.

It was Darby who helped build a bridge that allowed all of the performers the confidence necessary to pull off the production.

“It’s deep and rich; some stories are very difficult to hear,” the director added. “Many of these people had never 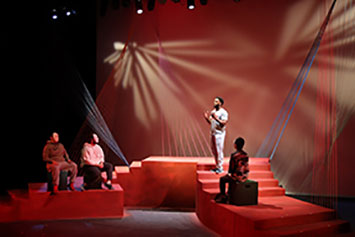 shared their stories before, and in doing so, they made discoveries of themselves… And there was always a sense that, ‘Wow, it felt so good to finally share that with someone.’”

Sebastian Wang caps off his impressive Wabash theater career by serving as the Stage Manager and Assistant Director. Ace Dzurovcik, also a senior, has designed the sound, while Sammy Lebron designed the projections used in the production, including video clips of the storytellers.

Performances are free and open to the public, but should be reserved through the Fine Arts Center Box Office. Performances are scheduled Wednesday through Saturday nights, April 20-23, at 8:00 p.m. There is also a special matinee performance on Sunday, April 24 at 1:00 p.m. in celebration of the 50th anniversary of the Malcolm X Institute of Black Studies.

In addition to the production, the cast and crew invites the community for a special lunchtime talk by lighting designer Erica Lauren Maholmes. She will be talking and answering questions about her work and art as a Black woman in a field dominated by white men in Korb Classroom on Wednesday, April 20, at 12:10 p.m. Lunch will be available beginning at noon in Littell Lobby.