With 13.7 seconds left in the fourth quarter of the 2001 Monon Bell game, Wabash faced an all-too-familiar sight.

Despite leading by two touchdowns in the first half, the Little Giants had seen their lead disappear. DePauw marched 61 yards down the field in 68 seconds and tied the game.

Wabash had lost five straight games in the rivalry, including in 1999 despite totaling more than 500 yards of offense, followed by a fourth-quarter collapse in 2000.

So when  A.J. Smart found the end zone for DePauw, it seemed like more of the same. 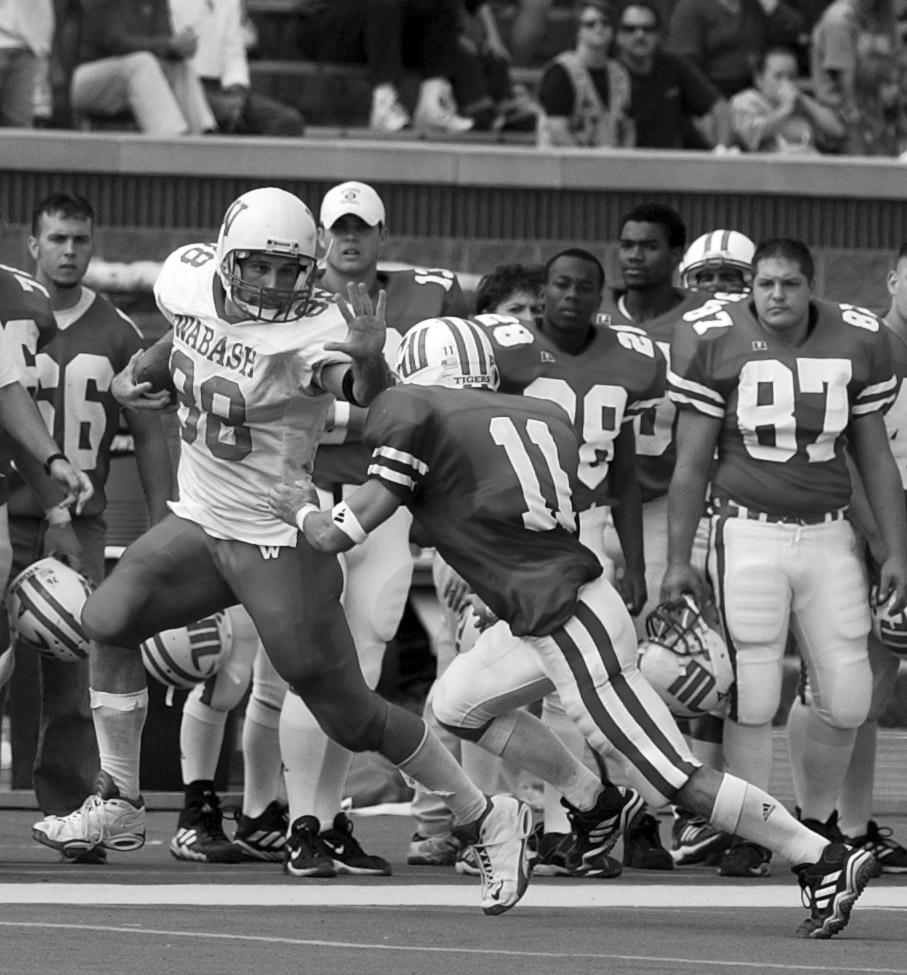 “There was a little bit of a hush over the crowd,” then-head coach Chris Creighton said. “You started hearing a lot of, ‘Here we go again.’”

As DePauw celebrated, Creighton started the rallying cry that would prompt the most iconic sequence in Wabash football history.

“I can remember Coach Creighton coming down with a steely look of determination, saying, ‘You’ve gotta believe we can do this. This is our time. Let's go,’” quarterback Jake Knott ’03 recalled. “We knew what we were going to do. There was a sense of, ‘We've been working for this.’”

With less than 14 seconds on the clock in the fourth quarter and just one timeout remaining, every second was crucial if Wabash hoped to score and avoid overtime. Eddie Garza ’05 fielded DePauw’s squib kick and took it seven yards before hitting the ground.

“He did exactly what he was coached to do,” Knott said. “He grabbed the ball with two hands and went down. Now, we only had 60 yards to go in two plays with a timeout. That felt doable.”

On the next play, Knott found wide receiver Kurt Casper ’02 over the middle for nine yards to get near midfield.

“He got annihilated,” Knott said. “But as he's catching that ball, he's already calling a timeout as he's going down.“

There were 2.7 seconds remaining. There wasn’t much debate in the huddle about what play Wabash would run.

“There was only one kind of play you were going to run from 50 yards away,” wide receiver Ryan Short ’03 said. “It’s one of those magic plays, like shooting the half-court 3-pointer for the win.

Trips Lex Gun Colorado Red. They practiced the play every Friday for situations just like this one.

DePauw pressured Knott as soon as he got the snap. He rolled right, trying to buy time for his receivers to make it to the end zone.

“I had plenty of arm to get it there, but I couldn't take a sack,” he said. “Once I saw that they were bringing pressure, I just took off outside. One of their linemen came out of nowhere. I took a few stutter steps. I looked down and Short was getting close to where he would need to be. I just let it fly.” 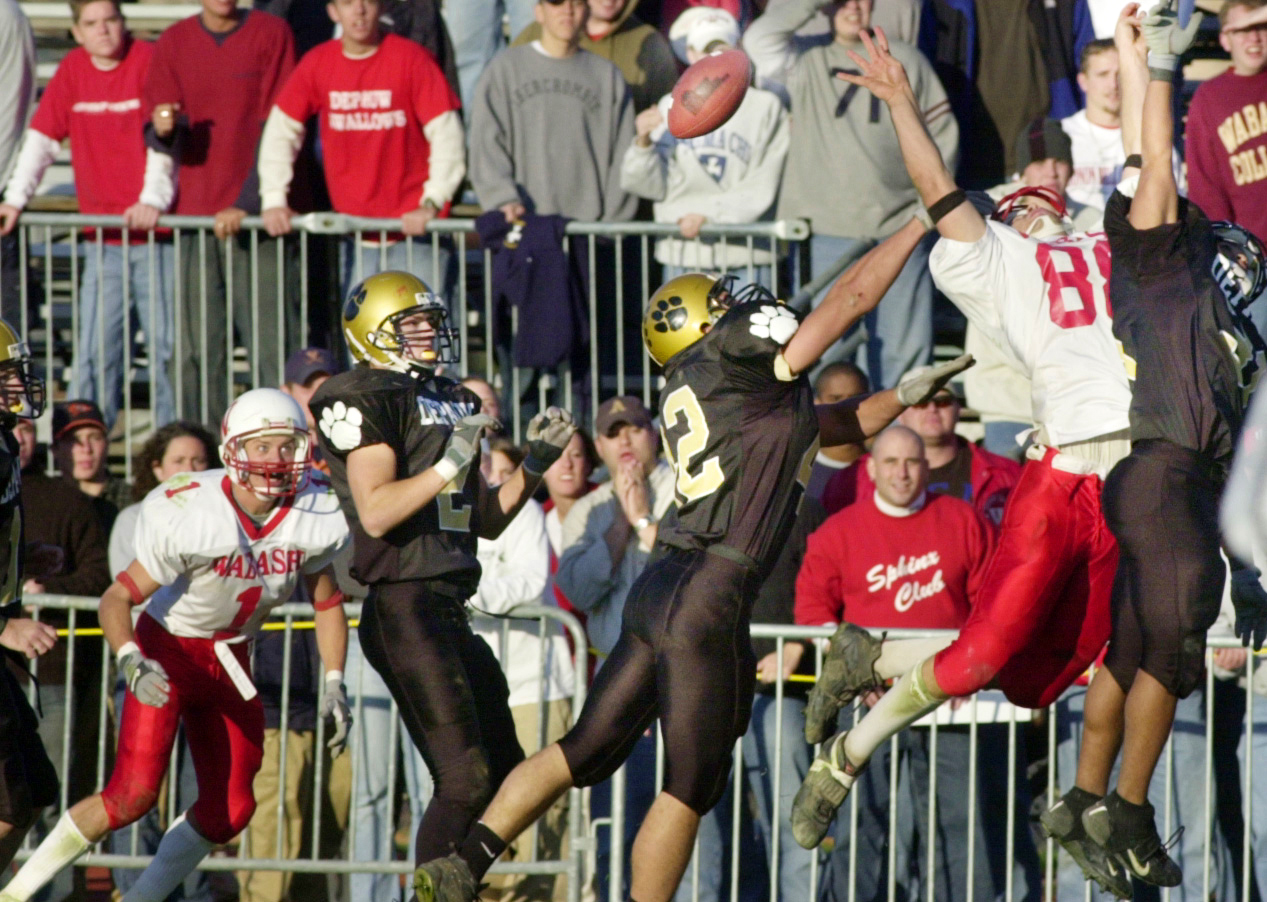 As the ball was in the air, Casper yelled to Short, “Tip!” Short was around the 5-yard line.

Casper was waiting in the end zone to catch the deflection.

“The snap was great. The blocking was great. Jake made an absolutely incredible throw that put us in a position to even have a chance,” Casper said. “Ryan did an amazing job of tipping the ball the way he did. I just happened to be in the right place at the right time.”

As for what happened to the ball? Casper dropped it.

“Ryan tackled me and then it was mayhem after the play,” he said. The ball got punted into the stands by one of the DePauw players. One of our managers went and got it. I'm looking at the ball right now. It’s in my office.”

“We all squashed Kurt, about 1,000 Wabash students and football players,” Short said. “It was euphoric.”

Meanwhile, Knott was on the ground.

“I got off a full throw on it, but he smoked me,” Knott said. “As I’m rolling out of bounds, (assistant coach) Steve House is screaming at the official for a late hit. I ended up looking up at one of the aluminum benches on the sideline. Next thing I know, the place went berserk. I had a feeling what happened. I knew it was unlikely that Ryan got to the endzone. Someone came and picked me up. I said, ‘What happened?’ ‘He tipped it to Kurt, and he caught it!’ The celebration was on.”

The television announcers wondered whether the play was an accident.

“I had to catch it a little bit to tip it back, almost like setting a volleyball,” Short said. “People always say, ‘It hit off your helmet.’ I always wanted to make it a Wabash physics experiment. There's no way that thing could hit off a helmet and bounce back the way it did.”

It was a designed play that worked exactly once.

“Fortunately, it was the one that actually counted in the game,” Olmstead said.

Olmstead rushed onto the field and quickly found himself at the bottom of a dogpile.

“With 100 guys stacked on top of you, it was incredibly emotional,” he said. “I remember laying at the bottom of that pile thinking, ‘Geez, Louise, this is something that very few players get to experience in their entire lives.’”

The celebration was just beginning. It carried over from the field to the bus.

“The Sphinx Club loaded the bell up on the back of a truck and drove it back to Crawfordsville,” Olmstead said. “Nobody took a shower. We were in our gear on the bus singing and carrying on for the 27-mile ride north. Then we went straight to the chapel and had a celebration with the players, the parents, the fans, and the students. That sucker rang for a long time after that.”

The celebration in the chapel still stands out to Creighton, 20 years later.

“We’d get a guy up there to speak and they'd say two words before a huge roar would break out,” Creighton said. “He couldn't even finish what he was saying before the fight song would break out with people ringing the bell.” 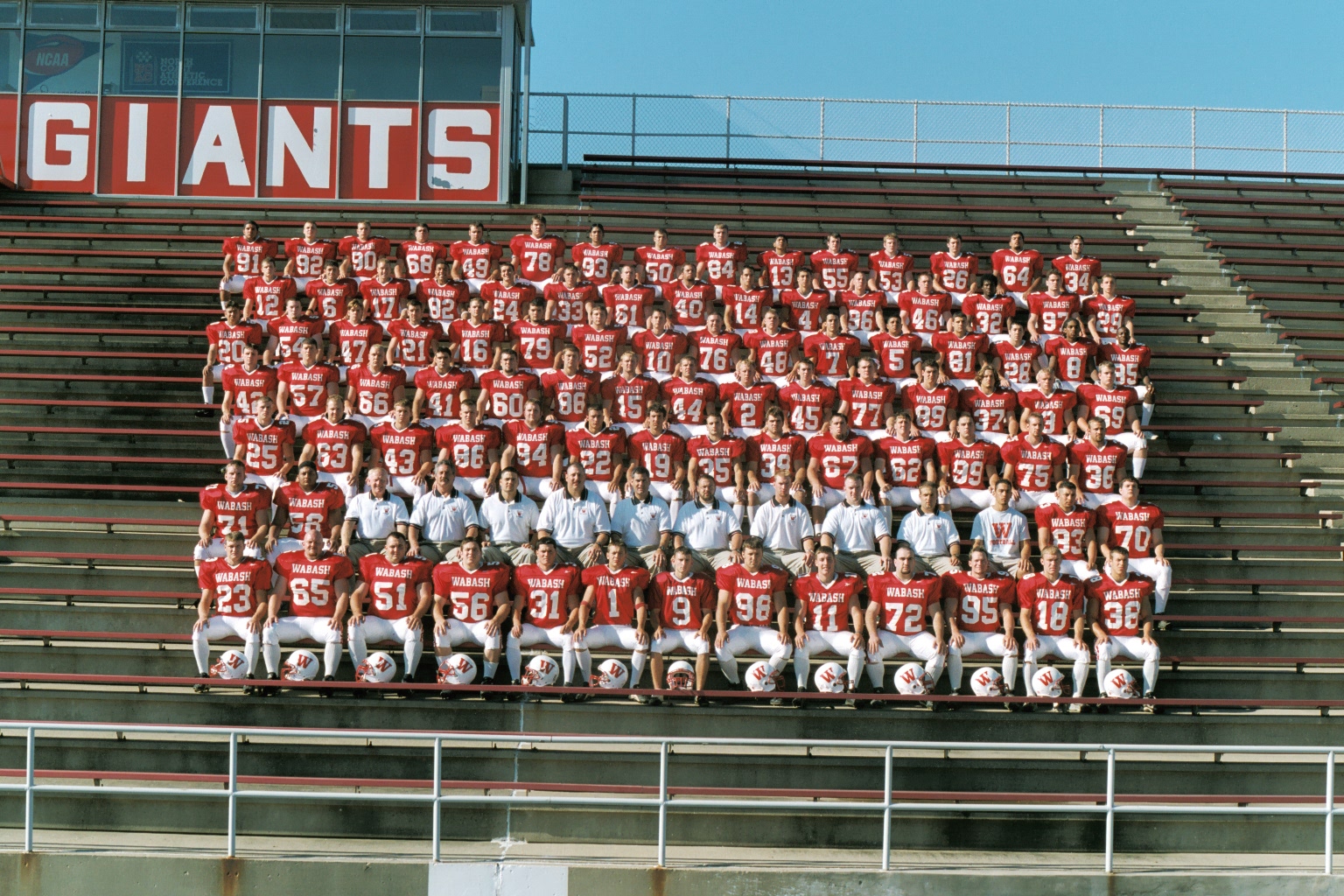 “There was a moment when they brought the bell back to campus and everybody celebrated,” Short said. “It still gives me chills. I thought, ‘Whoa, this is a different level.’ It created that sense of community. You felt how big it was. It wasn't 100 football players. It was 10,000 Wabash people.”

The euphoria lasted long after that night.

“Local businesses and gas stations had signs in their windows saying ‘Congratulations, Wabash,’” Olmstead said. “It sparked a fire within the community, both on campus and off campus, to raise the level of expectation.”

Since that day two decades ago, Wabash has won the Monon Bell 14 times. In that span, the Little Giants haven’t had a losing season and have won or shared the conference title 10 times.

Around this time each year, Knott will take a trip down memory lane and rewatch the play.

“A few years ago, my 6-year-old daughter said, ‘Why are you all grainy?’” Knott recalled. “They have fun watching, but their first question is, ‘Why does this look so old?’”

Creighton, now at Eastern Michigan University, still remembers what he calls the most “special play of my career.”

“The Monon Bell comes around in mid-November and the Wabash faithful keep the memory alive,” he said. “It was just such a special moment.”