Wabash College President Scott Feller has announced that an extraordinary $10 million gift from Kevin G. Clifford ’77 and his family made it possible for the College to build the stunning new Little Giant Stadium.

“Kevin has given his time, talents, and treasure to Wabash for four decades, but this extraordinary gift allowed us to create one of the finest stadiums in NCAA Division III,” President Feller said. “All of us at the College are grateful for Kevin’s generosity and commitment to his alma mater. Kevin’s lead gift for Little Giant Stadium is truly transformational, and it will make an enormous difference for our scholar-athletes, alumni, and all who love Wabash.” 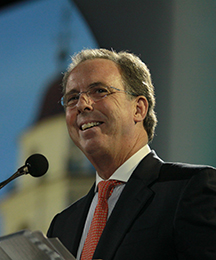 Mr. Clifford played quarterback on Wabash football teams in the 1970s and was an assistant coach in 1977 when Wabash went 11-2 and played in the National Championship game. As an alumnus, he served Wabash on the Board of Trustees from 1994 through 2014, led a presidential search committee, and was on the cabinet of two capital campaigns that raised over $200 million for Wabash.

Mr. Clifford spent his entire 37-year career with the Capital Group companies. He rose to become Chairman and Chief Executive Officer of American Funds Group, and was a key member of the Capital Group’s management committee. He is a member of the Board of Directors of the National Football Foundation/College Football Hall of Fame, which has a mission to promote the power of amateur football in developing the qualities of leadership, sportsmanship, competitive zeal, and the drive for academic excellence in America’s young people. He is also on the boards of The National World War II Museum and the United States Olympic and Paralympic Foundation.

Little Giant Stadium is home to the Wabash football and track and field teams. Clifford asked that the playing field in the stadium be named in memory of Frank Navarro, Wabash’s Hall of Fame football coach who led the team to the 1977 Stagg Bowl championship game.

“I was fortunate to play for and work for Coach Navarro,” Clifford said. “The lessons learned under his tutelage served me well in life and business. Discipline, attention to detail, perseverance, sacrifice, and teamwork were of paramount importance to Coach Navarro and we all benefited from his leadership. My family and I hope the new Little Giant Stadium will provide future generations of Wabash scholar-athletes, coaches, faculty, and the broader community a best-in-class facility in which to compete, learn, and win!”

The $15 million stadium is fully accessible and includes a main grandstand with seating for more than 3,500 fans; media, game operations, and coaching booths; a second-floor W. Club Lounge with four dedicated suites; ticketing and concession areas; FieldTurf playing field and Beynon all-weather track surface; a new and relocated scoreboard; and the Hall of Giants that celebrates our rich tradition of athletics excellence. The W. Club Lounge bears the name of Mr. Clifford and his family.

Mr. Clifford’s leadership and catalyzing philanthropy moved the vision for a new stadium from a list of “someday” projects in the College’s Campus Master Plan to the top of the list.

“Frankly, the element of a surprise announcement launching the stadium construction, combined with the sheer size of the gift, gave us tremendous momentum to raise additional funds for the project,” said Dean for College Advancement Michelle Janssen. “All of us appreciate Kevin’s abiding gratitude to Coach Navarro, and are so pleased and proud that the field bears his name. We are grateful to his classmate, Gary Reamey ’77, for leading our efforts from the architect’s first sketches through completion of this amazing stadium.”

The Stadium was designed by the DLR Group’s Kansas City-based Sports Design arm. F.A. Wilhelm was the general contractor that managed all aspects of construction. Continental Office Group designed the signage and graphics for the stadium.

Little Giant Stadium and Frank Navarro Field will be dedicated at halftime of Wabash’s football game against Allegheny on Saturday, September 18. 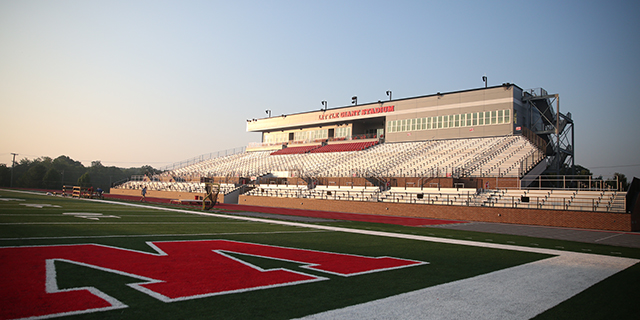