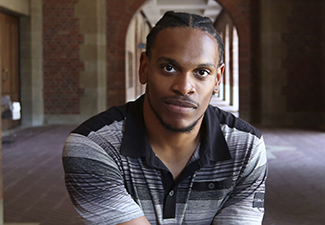 The standout football player and theater major turned in a stellar effort playing the Stage Manager in Our Town, leading Wabash audiences through life in Grover’s Corners.

He headed to Los Angeles to get an MFA in acting at the USC School of Dramatic Arts, one of the finest graduate programs in the country. One of 12 people admitted, Clark felt on top of the world.

Then not so much.

The past two years have been a struggle.

“I was really in a bad place,” he says. “I was depressed and had no faith in myself, no faith in this work I was doing. Before starting therapy, I was keeping a lot of stuff in.”

For the guy who entered Wabash intending to major in physics, there was no equation, no reasoning to acting. He sought control. If he made a mistake, he’d correct it. If things weren’t perfect, he put in more work. Hours of work. His existence was black and white.

“The wall I run into happens because I think in right and wrong, good or bad,” he says. “On a stage, it doesn’t help to think in those terms. Our professors tell us all the time, ‘Get out of your head.’”

Clark felt tormented that first year: stymied by inconsistent performances, stung by blunt critiques, and frustrated by others who showed up late for rehearsals or weren’t putting in the same amount of work.

David Bridel—one of his professors and the dean of his graduate program—urged him to let go of judgment. He didn’t have to be the one always going crazy. He couldn’t control everything.

So Clark gave himself a break. He says he now sleeps comfortably for the first time in seven years.

“It’s not about perfection,” A.J. says between deep breaths. “I’m in a better place because I’m not trying to be a great actor. If I go up there and mess up, life will go on.”

He’s broadened his focus by writing screenplays and producing his own content. More than acting, he wants to be a creative force. In February, A.J. will take part in a three-play theatrical program that includes 24 performances in 28 days before a showcase in the spring.

“Oh, I’m ready,” he says. “The winds are changing. I have such a passion when I wake up in the morning. It’s not about being a great actor, it’s about the great moments.”