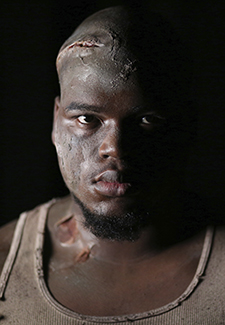 THE CREATURE DRAGGED ITSELF ACROSS THE STAGE, lurching forward to pull its massive frame onto a wooden platform. Surgical scars across its face and scalp seemed swollen and ready to burst. It sounded more animal than human as it rose on its knees and pulled a blood-filled tube from its chest.

The audience was transfixed.

“That ‘birthing’ is my absolute favorite moment of the play,” says the Wabash junior who helped to design and apply the makeup that transformed former defensive lineman Tim Fields ’19 into The Creature for the Wabash Theater Department’s production of Nick Dear’s Frankenstein.

“Tim’s acting was incredible,” says Paul Haesemeyer ’21, who worked with Boyd under the supervision of Wabash costume designer Andrea Bear. “I sometimes forget how the costume and makeup affect the actor’s dynamic.”

“The makeup really helped me feel like I was a thing, this creature,” says Fields, whose powerful performance was the heart of the play. “Victor Frankenstein refers to The Creature as a demon, and with the make-up, I can understand why people would see him that way. I looked truly hideous.”

Boyd hails from Galveston, Indiana, where in high school he and two friends “built the sets, did the lights, did the sound, and acted in the plays.” He didn’t know Wabash had a costume shop until he auditioned for his first play as a freshman and was told to go there for his fitting.

“I walked into the room and thought, This is really cool,” Boyd remembers. “I talked to Andrea and asked, ‘Hey, is there any way I can learn how to do this?’ She asked, ‘Do you know how to sew?’ I said, ‘Absolutely not,’ and she said, ‘Okay, we’ll teach you.’”

Coming to Wabash from Billings, Montana, Haesemeyer followed a more intentional path. His mom taught him to cross-stitch when he was a boy. He sewed clothes for dolls and dresses for friends. For his senior prom, the valedictorian made an 18th-century costume for himself and an elegant red gown for his date. His grandfather graduated from Wabash in 1967, so Haesemeyer decided to visit. He was surprised when Theater Professor Jim Cherry led him down to the costume shop. 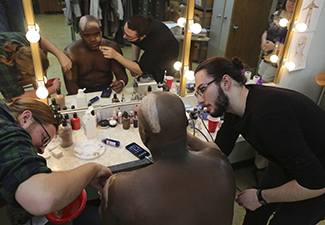 Neither student had experience with makeup and prosthetics, so Bear taught them the techniques, allowing them to adapt her original design as an independent study.

“She was there when we needed her, but I was amazed she would trust us with this,” says Haesemeyer.

“Everything I didn’t know how to do, which was most of it, Andrea taught us,” says Boyd. “In the process of trying to get this right, we messed up a lot, but she told us not to be afraid to make mistakes. ‘If something goes wrong,’ she says, ‘we’ll fix it.’”

By showtime, the students got it right.

“They wanted to make sure the audience could relate to him as a person,” says Haesemeyer. “A professor brought his kids in for the first half of the show, and when they saw the scars they were concerned for The Creature, asking if he was going to be okay.”

The makeup helped Fields’ to portray The Creature as both horrific and vulnerable, says Boyd. “Right at the beginning, when we saw Tim in that birthing scene, I was thinking, Hell yeah—we did it!”