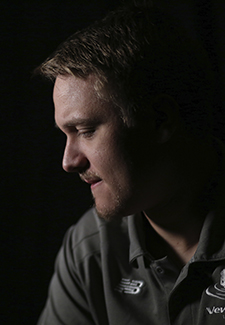 Jake Taylor ’20 walked down to the surf, turned around, and stared at the 400 yards of sand in front of him. He put down his camera and took it all in.

This was Omaha Beach. This was D-Day.

“The fact that any human being was willing to go and die for everybody else…” his voice fades as the tears well up in his eyes. “The whole war swung on that day, and I got to see the celebration of that day. What it still means to the people who were liberated.”

The anniversary of D-Day is the people of Normandy’s Fourth of July. American soldiers are invited to come over, to take part in reenactments, and—most of all—to be celebrated.

Just a couple years ago, Taylor’s brother, Hunter, was one of those soldiers who was asked to attend, and Jake and his mom went too.

As he took in the events of that day, he told his mom, Christian, “This could be a movie.”

She agreed. And now it is.

Christian is the director. Jake is one of the assistant directors.

Most of the filming took place in France this past summer, and with financial help from Wabash’s G. Michael Dill Fund, Taylor was able to be there and help bring his idea to life.