RUNNING FROM SCREAMING GIRLS ON THE STREETS OF PARIS, ERIC DAMAN ’92 FOUND HIMSELF IN A WORLD HE WAS NOT USED TO BUT ONE HE HELPED CREATE. 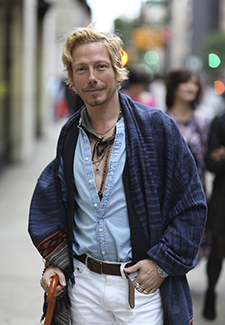 This was the worldwide phenomenon that was Gossip Girl—a show about privileged teenagers from the Upper East Side of New York City that aired on the CW Network from 2007 to 2012. Everyone who watched wanted to be these characters. Even more, they wanted to dress like them.

As a costume designer, Eric Daman had worked on other projects before. The design team he was on for Sex and the City had won an Emmy. But for Gossip Girl, he created some of the most iconic looks of a generation. In 2010 Allure magazine named Daman one of the seven influencers of fashion “who could change everything about the way we look.”

“Filming in Paris was really quite a moment, even more so than being featured in the New York Times or being in Allure—to have that experience and see how these kids, these stories, and these clothes were having an effect, I was thrilled to be a part of it.”

The fashion standard that Daman and Gossip Girl created was exclusive and elite. Collections would come right off the runway and to the show, before being featured anywhere else. However, being from the Midwest, Daman knew that most of the show’s audience couldn’t afford Henri Bendel, Barneys, or Bergdorf, so he created a line with Charlotte Russe to give girls the option of high-fashion looks at lower costs.

Standing outside of Freds at Barneys on Madison Avenue, Daman calls himself the Mistoffelees of menswear. It’s a joke—a play on the tuxedo-wearing “conjuring cat” from the T.S. Elliot poem adapted for the musical Cats. But he might be right. Daman’s choices for the male characters on Gossip Girl might have dazzled the world of men’s fashion as well.

“The availability of menswear has gotten so much better and the interest of it has gotten so high since we were doing Gossip Girl. Putting a straight guy in a pink bow-tie on television was revolutionary—and then you add a three-piece suit!”

Daman is now working on the Showtime series, Billions, currently in its third season.

His advice for anyone wanting to put the style in their lifestyle?