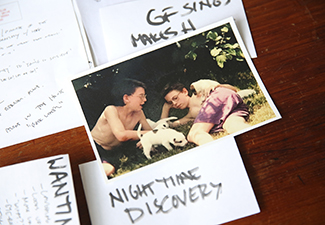 Sitting on the back of Russ Harbaugh’s desk in his office is a sketch by his mom. The drawing focuses on the crinoline of a dress, and it serves as a very important reminder to Harbaugh ’06.

“I like to think of a script as the crinoline of a film. If you can build the dramatic circumstance of the scenes strong enough, you don’t have to write all of it. You can shoot a tense scene and improvise some of it.” 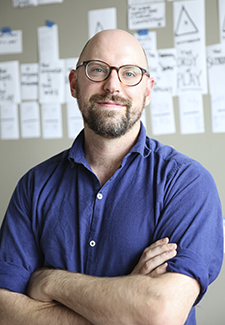 Following critical acclaim for his first feature film, Love After Love, (most recently, Esquire placed it #3 on its list of “Best Movies of 2018”), Harbaugh is hard at work on the second draft of his next movie.

The idea for Compound came from Harbaugh’s experiences being an identical twin…with some murder thrown in.

“It was a relief to find something I could kind of be obsessed with again.

“It doesn’t feel like I’ve arrived, and there’s pressure on the second film to live up to the first one. It’s very different. It’s going to be unusual. And maybe even more unusual than the first one, which was unusual!”