Wabash College student Joey Karczewski ’20 has earned a Benjamin A. Gilman International Scholarship to study abroad during the fall 2018 semester. The award will take him to Austria and Germany.

Karczewski, an economics and German double major with a French minor who will study in Vienna, Austria, and Marburg, Germany, received the Gilman Scholarship, an award of $3,500, to apply towards study abroad or internship program costs. 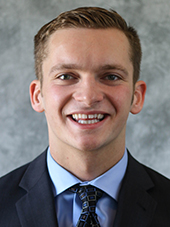 “I am beyond excited to be studying abroad next semester,” said Karczewski, a native of Crown Point, Indiana. “A lot of the experiences that have shaped me have come from experiences internationally.”

Karczewski took an immersion trip to Tübingen, Germany, following his freshman year and studied abroad in India earlier this summer through funding by the G. Michael Dill Fund. These experiences have only cemented his belief in giving back as he prepares for a career in international business.

“Much of my higher education has been funded by my community giving back,” Karczewski said. “This has instilled charity as one of my core values. Receiving the Gilman only strengthens this belief.”

“To apply for a Gilman Scholarship, it is necessary to both describe what a semester’s study abroad will do for one’s academic and career goals and to propose a follow-up service project to encourage others to study abroad,” said Susan Albrecht, Wabash College Fellowship Advisor. “Joey put together a fantastic application and I am very pleased he was awarded the scholarship. He is obviously an individual who is keen to explore the wider world and learn from other cultures and traditions.”

Karczewski’s acceptance brings the number of Gilman Scholarship winners at Wabash during the 2017-18 academic year to three. Brandon Arbuckle ’19, who studied in Aberdeen, Scotland, and Joseph Bertaux ’19, who studied in Budapest, Hungary, both claimed Gilman awards to study abroad during the fall 2017 semester.