Wabash College celebrates its 179th Commencement exercises on Sunday, May 13, at 2:30 p.m. on the College Mall. The ceremony will be streamed live at www.wabash.edu/live

President Gregory D. Hess will ring out the Class of 2018. One hundred ninety-eight men are scheduled to receive their sheepskin diplomas in the ceremony.

Two graduating seniors, Ephrem Chedid and Jared Cottingham, will be the only featured speakers at the Commencement in keeping with a long-standing Wabash tradition.

A native of Beirut, Lebanon, Mr. Chedid majored in political science and minored in business and French. He held several executive positions as a member of Phi Delta Theta fraternity, as well as vice president of the Interfraternity Council. Chedid also was involved in the Sphinx Club and Sons of Wabash during his four years on campus. He is the son of Elizabeth Dyer and Elias Abou Chedid of Jounieh, Lebanon. 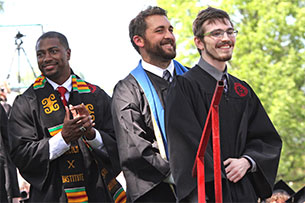 Mr. Cottingham majored in theater and minored in music and chemistry. He has been involved in the Global Health Initiative and Pre-Med Society and has starred in several theater productions during his Wabash career. He wrote an original play, Do Not Resuscitate, which will premiere at the Indianapolis Fringe Festival this summer. Cottingham has been active in the Glee Club, Tau Kappa Epsilon, Sons of Wabash, and is a four-year member of the golf team, receiving academic all-conference honors. Cottingham received the Dean Stephens Award, Robert Wedgeworth Research, Scholarship, and Creativity Prize, and the Erminie C. Leonardis Theater History Award. Cottingham will graduate with Phi Beta Kappa honors and will attend medical school after graduation. He is the son of Melissa and Timothy Cottingham of Lowell, Indiana.

Commencement Day at Wabash begins at 11 a.m. with Baccalaureate, which will be held in Pioneer Chapel. Rev. Adam Fronczek ’01, will give the Baccalaureate sermon. Fronczek is Pastor at Knox Church in Cincinnati, Ohio.

At the conclusion of the Commencement ceremony, President Hess will guide the graduates through the Senior Arch 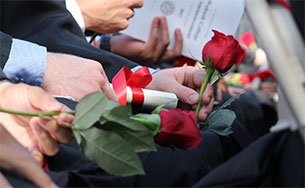 and proceed to the steps of the Allen Center, where the Class of 2018 will sing “Old Wabash” for the first time as alumni.

Following the ceremony, there will be a reception for the Class of 2018 near the Frank Hugh Sparks Center west portico (between Morris and Wolcott Halls).

In the event of inclement weather, Sunday’s Commencement exercises will be held in Chadwick Court of the Allen Athletics and Recreation Center.

This week’s edition of the “Wabash On My Mind” podcast talks with 2018 Commencement speakers Ephrem Chedid and Jared Cottingham. Topics include their Wabash experiences, favorite memories, and preparing for Sunday's speeches. Just click the red play button inside the graphic to enjoy an audio preview.