Bolstered by a grant from the National Science Foundation, Wabash College will establish a scholars program in the physical sciences that seeks to increase the number of physics and chemistry degrees awarded by the institution.

The John Lyle Campbell Science Scholars program seeks to increase the number of science degrees conferred to first-generation college students, i.e. students for whom neither parent has a degree, and to students traditionally underrepresented in the physical sciences.

"Wabash has a proud history of providing a top-rate education to young men that come from diverse backgrounds,” said James Brown, chair of the department of physics.  “Our goal to attract, develop, educate, retain, and graduate these students aligns well with a national need for science graduates.  The S-STEM program (Scholarships in Science, Technology, Engineering, and Mathematics) of the National Science Foundation seeks to develop the best talent in science and being awarded this highly competitive grant reflects well on both the quality of our chemistry and physics programs and the students these programs attract."

The nearly $600,000 grant over the next five years will award 12 scholarships annually valued at $7,500 which will be renewable for four years. 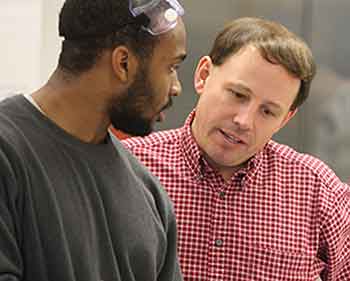 Led by Brown and Scott Feller, the Howell Professor of Chemistry, Campbell Science Scholars will take part in a comprehensive program that includes mentoring, tutoring and exposure to scientific research opportunities.

Brown and Feller will also team teach a freshman seminar for scholars entitled “Energy: Transformation and Delivery,” which examines both scientific and societal considerations of energy use.

The John Lyle Campbell Science Scholars program plans to meets its goals with a four-pronged approach: expand access to the high-quality and proven academic programs in the physical sciences at Wabash; engage prospective science students in the scientific research process early in their college career; develop a robust community of science scholars; and provide all students with a more diverse learning experience in the sciences that represents the changing face of the scientific community.

“The Campbell Scholars program continues a long tradition at Wabash College of providing access to the superb faculty, staff, and programs that have made it one of the leading producers of doctoral recipients in the physical sciences,” Feller said. “We envision a special role for Wabash College in expanding the pool of students committed to improving our world through scientific progress, for example by increasing the number of scientists among minority and first-generation college students that constitute a substantial portion of the Wabash student body.”

In a recent study of the undergraduate beginnings of physical science Ph.D. recipients, Wabash ranked fourth nationally among baccalaureate institutions.  The College’s success in educating scientists is rooted in a rigorous liberal arts education delivered to small classes of motivated students by dedicated faculty.

A renowned scholar in the sciences, John Lyle Campbell (W1848) taught mathematics, physics, astronomy and civil engineering courses at Wabash from 1849-1904 and his 55-year tenure is the longest in school history.  He also served as the secretary of the 1876 Philadelphia Exposition.