Class of ’63 and Whites Shine at Banquet A Big Bash record crowd turned out Friday night for the 2013 Big Bash Banquet to celebrate the 50th reunion of the Class of 1963 and to honor outgoing President and First Lady Pat and Chris White. 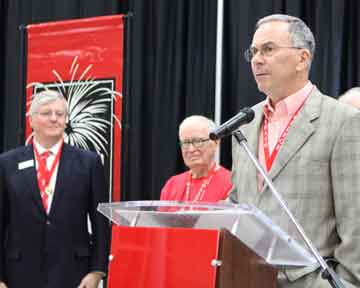 Over 400 alumni and guests gathered at the end of the first day of Big Bash Weekend in an event that annually pays tribute to the alumni who have returned to Wabash for their 50th reunion. The Class of 1963 was out in force — nearly setting a Big Bash record for attendance — thanks to the efforts of Reunion Chair Larry Hutchison and Class Gift Chair Rusty Nichols.

After a festive reception and dinner, Nichols, who served as President of Hanover College for over 20 years, presented President White a 50th Reunion Class Gift check of more than $2.3 million.

“Thank you to the men of the Class of 1963,” said President White. “You have shown once again that Wabash men can rise to any challenge and make a habit of exceeding expectations. Congratulations to Larry Hutchison and Rusty Nichols for all of the work you did to bring so many guys together and to elicit from them the love and dedication to Wabash represented by this stupendous gift.” 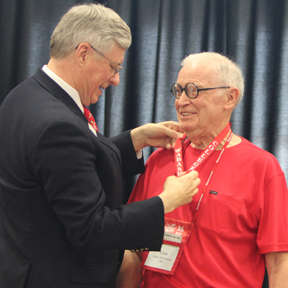 Some members of the Class of 1963 traveled long roads to return to their alma mater. Dick West rode his motorcycle 4,000 miles from his home in North Carolina on a rather circuitous route through Arizona and Utah before arriving in Crawfordsville. Others, like longtime Montgomery County Judge Tom Milligan, made the hefty trek of six blocks to return for the reunion.

Whether from near or far, the gentlemen of the Class of 1963 — and all of the alumni who returned to campus for the Banquet — relived old memories, recounted stories of legendary deans and professors, and rekindled the bonds that brought all of them to the tiny liberal arts college for men.

“In coming together, you bring Wabash alive,” said President White. “You will probably see some men this weekend that you hardly knew in your time at Wabash, but in this context of your reunion, of becoming one again with each other, you will come to know them anew. And in knowing one another anew, you will, I hope, find Wabash again and find in Wabash a college worthy of your support and loyalty, as the men of 1963 have shown.” 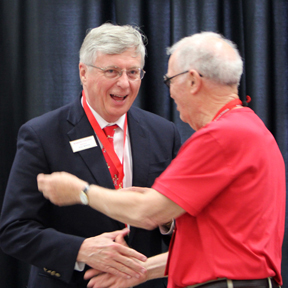 The President had the honor of presenting the first 50th Reunion Medallion to Hutchison, who served as his class reunion chair — and served the College as a Trustee and Emeritus Trustee. After he received his medallion, Hutchison then read the names of each member of his class who had returned. President White presented each man with a medallion.

After President White made the final medallion presentation — and in a surprise turning of the tables — Hutchison slipped a 50th Reunion Medallion over the neck of President White and named him an honorary member of the Class of 1963.

The honors didn’t stop there. Greg Estell ’85, President of the National Association of Wabash Men, stepped to the lectern for a pair of special presentations. By unanimous vote of the NAWM’s Board of Directors, President White and First Lady Chris White were each named Honorary Alumni of the College — the highest honor the NAWM can bestow on non-alumni of the College.

“The Chris White that we will miss the most is Pat’s partner in all things Wabash,” Estell read from the citation. “You have traveled to every corner of the country to meet Wabash alumni of all generations, leading so many of us to say, sotto voce, ‘Wow, that Pat White really outkicked his coverage.’ Your graciousness, your good humor, your can-and-will-do attitude, and your infectious laugh, will be missed around these parts. You have been good medicine indeed for Wabash, for Crawfordsville, and for Montgomery County. 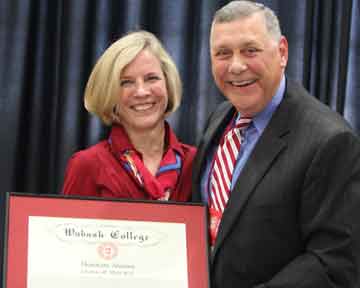 “Today, you become the 76th person, and the tenth woman, to join the ranks of honorary alumni of Wabash College. But you are one of a kind. For being such a contributor to the life, health, and happiness of our communities, and for years of friendship past and to come, the National Association of Wabash Men is proud to name you, Chris White, an honorary alumna of the Class of 2007.”

Estell then honored President White, who led the College as its 15th president since 2006 and brought Wabash through the tumultuous economic recession. President White chose to align himself with the men in the Class of 2010 — the first class the President rang in and out of Wabash.

“You wasted no time imprinting Wabash with your own stamp—making William Butler Yeats’ epigraph, ‘In dreams begins responsibility,’ into the College’s unofficial motto, challenging the world to take young men and their education ‘Seriously.’ In doing so, you made yourself universally beloved by each of the three communities on which Wabash College is built—its students, faculty, and alumni. Your unflagging humanity and decency, which you displayed even under the most challenging of circumstances, was a shining example for the rest of us. 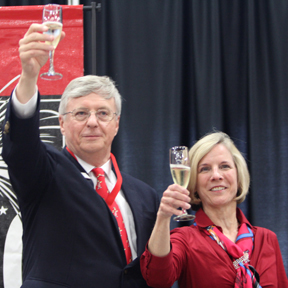 “For being a transformational force in the life and history of Wabash College, for your passion for the mission of Wabash, for your friendship now and in the future, and for so much more, the National Association of Wabash Men is proud to name you, Patrick E. White, an honorary alumnus of the Class of 2010.”

President White ended the evening with words from poet Walt Whitman and with a song.

“You alumni have never really left Wabash, or to put it a better way, Wabash has never left you. Across space and time, wherever you go, there is Wabash. To your friends, your associates, to potential students and friends of the College, you ARE Wabash College. And when you give voice to the mission of the College through the way that you think critically, act responsibly, lead effectively, and live humanely, Wabash sings through you, and it is a beautiful song indeed.”