It took all of three passes for the Wabash defense to swing the momentum permanently to one side in Saturday’s 122nd Monon Bell Classic.

Junior defensive back Delon Pettiford benefitted from a stiff wind, undercut a post route, and intercepted DePauw quarterback Matt Hunt on his third throw of the game.

“I was in deep third coverage,” said Pettiford, “and their quarterback was throwing against the wind. He didn’t put enough on the ball and I was able to get there and make a play.”

The Little Giant offense converted that turnover into a touchdown two plays later. Another score on its next possession and Wabash led 14-0 less than six minutes into the contest. 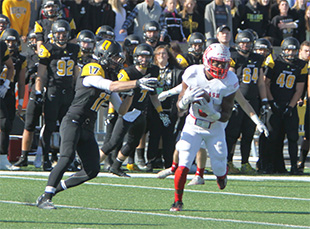 Late in the second quarter, Pettiford thwarted another Tiger drive with his second pick of the day. He stepped in front of a back-shoulder throw in the end zone, made the play, and returned the interception 34 yards.

Pettiford’s two interceptions in the first 30 minutes -- from a quarterback who had three interceptions in 237 pass attempts this season entering the game -- proved to be difference makers. Wabash also recovered a fumble in the first half and converted the trio of turnovers into 17 points in running out to a 31-10 halftime lead.

“The turnovers were really the difference in the first half,” said Wabash head coach Erik Raeburn. “They were great plays by Delon. When you play against a good quarterback, he will make some plays against you. Our guys just kept playing hard and came up with some critical takeaways, and when we got the ball on offense, we were clicking.”

Wabash quarterback Connor Rice '17 has seen such things often from the 5-foot-9 Indianapolis native, who finished with eight tackles on the day. Pettiford, who shares the team lead with four interceptions, simply makes plays.

“He does that all the time,” Rice said. “I’m really happy for him and the defense. They have played so well all year, and were phenomenal today. They put us in positions to be successful.”

“It feels good to play on this unit,” he said. “Today was everything we practice, just being in the right spot and making plays when it comes to you. I’m only doing my job.”

The effort capped a day that saw the Little Giants win the Monon Bell for the seventh consecutive season, earn its first outright NCAC championship since 2011, and clinch a berth in the 2015 NCAA Division III Playoffs.

“We knew that there was a lot on the line in this game,” Pettiford said. “We came out with a lot of intensity and tried to put them away early.”