Junior Joe Mount has thrilled audiences in Wabash College Theater productions for his wit, seriousness, versatility, and seemingly effortless talents as an actor. But when he takes the stage in the title role of Shakespeare’s Macbeth, he’ll be pushing himself in an entirely new direction as he takes on one of the most difficult and complicated characters in Shakespeare’s darkest tragedy. 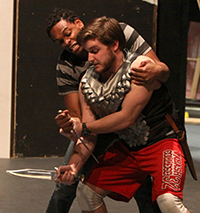 “Joe is one of those actors you just don’t get very often,” said Macbeth director James Cherry. “I could literally put him in any role in any play and he’d be great. But this role is a very difficult stretch for him. Macbeth is a brutal guy who is slowly going mad and becoming estranged from everything in his life. Joe’s the nicest guy in the world. So it’s a stretch for Joe because he can’t just rely on his natural charisma as a performer. He is really working for this.”

“Macbeth is a brooding, plotting, treasonous bastard who goes insane before he gets brutally decapitated,” Mount said. “I’ve never done anything like that. At first, I wanted to play ‘Macbeth the Misunderstood,’ looking for some redeeming quality to bring out in the character. But I now realize that Macbeth is a lot more powerful when he’s played unapologetically, fully embracing how dark his mind gets by the end of the play. I’m anxious to see how the audience will receive such a brutal villain.”

Ambition, power, greed, love, revenge, evil, guilt, and paranoia spill out on the Wabash Theater stage. And there is fighting — lots of fighting — murder, and blood spilling, too when Macbeth opens Wednesday, February 26 and continues through March 1. Performances are at 8:00 p.m. each evening and tickets are available through the box office.

While Macbeth is Shakespeare’s shortest tragic play, it is also one of his finest. Macbeth is a celebrated Scottish general who returns home after war. He is visited by witches, who prophesize that he will become King of Scotland. Stoked by his wife, Lady Macbeth (played by Elise Lockwood), ambition overcomes him when he sets out to murder King Duncan (Patrick Stroud) in order to assume the throne and fulfill the prophecy. Paranoia consumes Macbeth from there, and he ultimately spirals into madness.

“My main goal is to figure out how to slowly descend into madness while retaining some control,” added Mount. “There’s nothing worse than overly-dramatic acting, especially in Shakespeare, but the play is so dramatic that it can be difficult to find the balance between lunatic-murderer and cheap actor.”

Wabash last produced Macbeth in 1957 on the stage of the third floor of the downtown Masonic Temple building.

“It was time to do Macbeth at Wabash,” Cherry said. “It’s a play that is so very much of our time, our present moment. The story has to do with the end of war and what happens to the characters when they come home after having been rattled by the battles. And that’s where we are as a society today — what happens after war?” 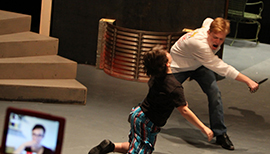 Because of the shape of the semester, Cherry and the production team have been squeezed for time. The cast list wasn’t set until late January, allowing roughly five weeks to bring the play to life. After rough-blocking the play in the first full week of rehearsals, the cast shifted gears to take advantage of the talents of visiting artist Chelsea Pace, a specialist in stage combat, who spent a week at the College.

Pace taught the actors how to fight realistically, but also safely. Two of the play’s actors, Tucker Mark (Lennox) and Aaron Stewart-Curat (Young Siward), serve as Fight Captains and together supervise nightly rehearsals that focus specifically on the scenes involving fights and battles. Their goal is to make the fights safe and realistic, but also to ensure that the choreography is fulfilled.

“The fighting in Macbeth is intense and in fact it may be unsettling to some people,” Cherry said. “That kind of physical expression onstage is both exhausting and exhilarating for the actors, but it’s also important for the audience to see it as authentically as possible. Having Chelsea here allowed us to incorporate the fight scenes early in our production work and have more time to rehearse them. We spend 30 minutes every night making sure our fight scenes are smooth and safe. And you can see the actors getting more real, more comfortable every day.” 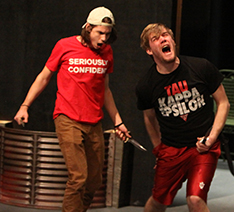 The play features plenty of Wabash Theater veterans, including Mount and Stroud, but also Noah Eppler as Banquo, A.J. Clark as Macduff, Patrick Kvachkof as Ross, Zach Canon as Seyton, and Rory Willats as Malcolm.

“I’m fortunate to have such great actors, top to bottom,” Cherry said. “A lot of times when you do Shakespeare, you have a few good actors and a few who are not so good. This group is a very strong ensemble.”

Costumer Andrea Bear deserves a Tony for her creative and resourceful approach to costume design and construction. Every costume is hand-made, including the armor worn by all the soldiers. Each piece of armor is made from scores of plastic pieces, cut from ordinary water and soda bottles that are knitted together. “Andrea’s work on this production is simply extraordinary,” Cherry said.

Complementing the costumes and fine acting is the set designed by James Gross, whose challenge was Shakespearean in scope — design one space that includes scenes in castles, woods, battlefields, and even a thunderstorm. Cherry remarked, “James designed a flexible space that really imbues the production with an atmosphere of foreboding.” Visiting Assistant Professor of Theater Jessie Mills is the sound designer.

The play is somewhat true to its time — written in 1606 in Elizabethan England and based on events from 12th century Scotland, but Cherry said his goal was to make it “amorphous and not set in stone in terms of its chronology.”

Cherry also embraces the notion that beneath the gory murders and fight scenes is a love story between Macbeth and his wife. While history recalls Lady Macbeth in pejorative terms — evil, controlling, and manipulative — Cherry sees motivation behind her actions. “We’re looking at the relationship differently. It’s more interesting if you see them as two people who are in love and who want the best for each other, but who make violently bad decisions. So our challenge is to work around the stereotypes of Lady Macbeth and show her for who she really is: someone whose very bad choices are motivated by love.” Mount’s talent and attention to detail and Lockwood’s fearless risk-taking as an actress make the relationship work brilliantly.

“Directing Macbeth has been great fun,” added Cherry. “It’s one of the ‘big ones’ that you just have to do in your life. I hadn’t done this show before, as a director or actor — it just felt time to do it at Wabash.”

The Tragedy of Macbeth at Ball Theater at Wabash College: Wednesday, February 26 through Saturday, March 1 at 8:00 p.m. each evening. Tickets are free, but should be reserved through the Box Office (boxoffice@wabash.edu or 765-361-6411).