Work in the same community for 18 years and eventually you’ll find yourself in the right place at the right time, and I’ve been a fortunate witness to at least five significant moments in the creation of the Dr. Mary Ludwig Free Clinic. That’s the new Volunteers in Medicine facility that will begin serving the thousands of uninsured men, women, and children in Montgomery County on August 26.

It’s a story that the clinic’s executive director, Wabash Professor Emeritus of Biology Bill Doemel, gets nervous about my telling. He’s concerned I’ll leave out any number of essential donors and partners and inspirations to what he accurately calls “an astonishing community project.” And he’s right—there’s no way these personal observations can do justice to all the people, organizations, and years that have brought this “culture of caring” to Crawfordsville.

“So many have seen this as an opportunity, and so many are part of it,” he told me last Thursday as I prepared to photograph the first of three open houses celebrating the clinic’s upcoming first day of operation. The list of partners and contributors alone fills up pages. It’s a story that begins with eight women almost 50 years ago, and what I’ve witnessed has been mostly Wabash moments from the past 15.

But to tell the story of many you have to start with one, and I think these five moments from my admittedly limited experience at least capture the spirit of what it took to breathe life into this amazing place. 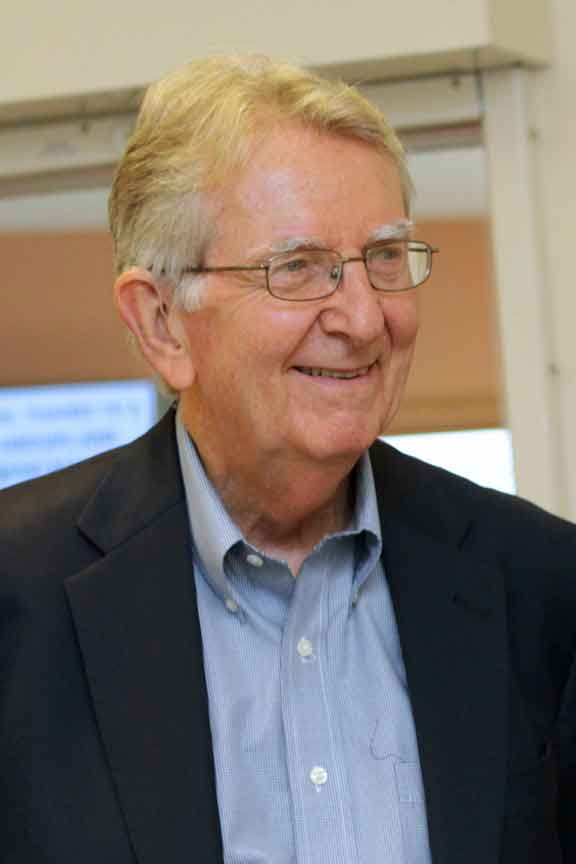 My own introduction began when I traveled to Columbus, IN, in 1997 to write a  story about Dr. Sherm Franz ’59 and the Volunteers in Medicine (VIM) clinic he’d helped establish. There I was introduced Karen Yarnell, a woman who had been denied insurance by her employer because she was an insulin-dependent diabetic; she’d come to the VIM clinic as a last resort.

“Taking free treatment didn’t feel quite right,” she said. “You don’t want to have to take from someone else. But everyone at the clinic was extremely professional and very kind. Not once did I feel embarrassed there.”

That’s when I learned that, after finances, shame is the biggest obstacle to people seeking the medical care they need. Sherm told me that VIM had surveyed uninsured workers in the city who said that when they received care from a physician’s office or emergency room they “felt looked down upon, like second-class citizens.

“What came through loud and clear was their yearning for dignity and respect,” Sherm said. “So we determined that providing that was going to be an important component of our facility.”

There’s a sign in the lobby of VIM’s Columbus clinic that reads: We welcome those in need to come without fear, and we invite those who serve to come without pride, so that their meeting may bring healing and hope to both.

This idea—that providing care brings healing not only to patients, but to doctor and nurse volunteers demoralized by the constraints of our current medical system and a community overwhelmed by the needs of its people—became the focus of the story. It was a philosophy expressed in some way by every volunteer and staff member I met at the clinic—every patient that walked in that door brought healing to the whole community.

But I never imagined a group of volunteers in Crawfordsville might someday adopt a similar model (a short-sightedness that explains why I ‘m a writer and not a community leader).

Fortunately, Christian Nursing Service (CNS) board members somehow found out about VIM and the clinic in Columbus, Sherm and VIM volunteers visited Crawfordsville to talk with medical workers, CNS board members visited Columbus, and VIM became one of many essential partners in CNS’s efforts. And last Thursday night I had the pleasure of photographing  Dr. Sherm Franz as one of the first guests at the clinic’s open house for medical volunteers.

I did serve one brief but feckless stint on the CNS board eight or so years ago, my sole contribution a naive attempt to get new windows for the Well-Baby Clinic’s site at the Milligan Memorial Presbyterian Church on Mill Street. Every time I stopped by Bill Doemel was there working on the computer or fixing some other problem. Even then he believed that the uninsured in Crawfordsville deserved the same care as all of us, that this city could do better by them than a few freezing-in-the-winter, hot-in-the-summer exam rooms in an old church.

I just wanted to put the windows in and go home.

At my final CNS board meetings I sat at the table with some of the most devoted and compassionate public health servants in the city—nurses like Chris Amidon and Rebecca Lang and Michele Thompson, the ever-present Isobel Arvin, and, soon after she and Pat arrived at Wabash, nurse practitioner Chris White. I thought, Bill’s gonna drive them crazy with this expanded clinic idea. And he might have if they hadn’t shared the same vision, and if Bill hadn’t been ready to do whatever and bring in whoever was necessary to make it happen. Bill will likely deny playing such a role, but I saw him bring an even stronger sense of urgency and possibility to a roomful of volunteers who had spent a  good portion of their lives caring for the people in this community and wanted to do an even better job of it. Now they had a vision of how that might happen and the leadership to follow-through on what would become a six-year effort.

But first they had to get local doctors onboard.

Doctors Keith Baird ’56 and John Roberts ’83 were the first Wabash alumni I wrote about when I began editing Wabash Magazine. The article was titled “So Long, Marcus Welby?” and focused on the challenges facing primary care physicians in the 1990s. After meeting these men I realized that the skill, care, and concern I’d known from the family physicians of my youth was alive and well here in Crawfordsville. My favorite quote from that story was Keith’s:

“To practice good medicine you’ve got to have personal involvement, and we’re losing that.”

But Keith was determined not to. After retiring in 2000 he had begun seeing patients at CNS’s Clinic, and by the time he finally retired from that work (I got to photograph the reception honoring him—the room was packed!) they were coming in at record numbers. His departure left a void no one was prepared to fill.

Then at the 2008 Wabash Big Bash Reunion colloquium session, Dr. Rick Gunderman ’83 gave a talk titled, “We Make a Life By What We Give.” I was standing behind John Roberts when Gunderman finished, and I asked John what he thought of the presentation. John has a dry sense of humor, so I expected an answer tinged with irony. Instead he looked me in the eye and said, “He reminds me of why I wanted to practice medicine in the first place.” Not a trace of sarcasm, still a bit of reflection in his tone of voice. I wondered what he might do with his re-ignited passion for his vocation.

Bill was sitting right behind him and no doubt had some suggestions, but I don’t think John needed much convincing. He took on some of the new clinic’s most challenging work, including the convincing other doctors and health workers to join the effort. John’s embrace of the project was a stunning and inspiring turning point.

So that’s three moments I witnessed. I thought I knew most of the story. Then I photographed Mary Ludwig during two of last week’s clinic open houses and realized I didn’t know the half of it.

Mary and seven other women started the Christian Nursing Service’s Well-Baby Clinic back in 1968. Her parents were the children of Italian immigrants and she grew up during the Great Depression, when almost everyone was struggling.

“Little food, lack of medical care and no jobs available due to the Depression made me very aware of the hardships and pain that my parents underwent, and those memories never left me,” Mary Ludwig wrote. Maybe some of those memories were soothed when she began offering free care at the CNS Clinic in 1968, a place of healing for more than 40 years. In any case, the new clinic is well-named—it took more than a half-hour for Mary to get through a gauntlet of hugs to the Ludwig Family Room where I was waiting to photograph her.

I failed to get one shot I really wanted—of Mary with Carolyn Snyder, my neighbor, who was also on that first CNS board and served on it for four decades. As Bill is quick to point out, it was eight women on that first board in 1968 that got it all going.

“You think back to the eight women who first had the vision for health care for those who needed it here; they saw the need, knew what they had to do, and just did it.”

Wabash readers would recognize the names of many of CNS board members over the years—Degitz and Powell among them—and the College was deeply involved in the current project. That project has shaped a current student, too. Rob Luke ’14 was the summer intern for the new clinic as the group rushed to get the place ready. Bill says Rob was “absolutely superb.

“He went above and beyond our imagination helping with the clinic’s new Website, software, and practically anything else that needed doing.”

Rob was even more impressed with the men and women at the clinic—from the volunteers to the folks repurposing the what had been a MainSource bank branch into one of the nicest medical facilities in the city.

“No matter how many years of experience they have of doing their jobs, they do not hesitate to ask for help or welcome a new set of eyes,” Rob said. “There’s a sort of humility and camaraderie here that’s lacking in most businesses these days.”

Rob wants to practice medicine in the Navy, then “retire and start a clinic of my own to make the community around me a safer one to live in for everyone regardless of their lot in life.

“The experience here has shown me that there are great people walking among us who do not help others for recognition, but simply to see the smiles on the faces they help.”

When Professor Don Baker wrote the first Wabash mission statement not long after the Christian Nursing Service began its work in Crawfordsville, he concluded that a Wabash education should teach men to “live humanely in a difficult world.” This new clinic serves those who know first-hand how difficult this world can be and was built by those determined to make it better—in just 8 weeks it became a formative and essential part of Rob Luke’s Wabash education.

The fifth significant moment I witnessed has meaning perhaps only to me. A tall, older woman walked into the clinic near the end of Sunday’s community open house, looked around the renovated building, and spoke to several of us standing near the entrance.

She reminded me of Karen Yarnell, the woman I’d written about 15 years ago at the Columbus VIM clinic. Karen eventually got her own insurance, but she remained a grateful advocate for the free clinic.

“I would walk in the door and I'd get hugs from people and they'd ask me how I was doing," Karen said. "Somebody from Volunteers in Medicine should go on 60 Minutes and tell the whole world how to do this."

The woman who walked into the Dr. Mary Ludwig Free Clinic last Sunday didn’t have such lofty aspirations, but hers were as heartfelt.

“I was a patient at a clinic like this once, but I don’t think I’ll be coming here for that,” she said. “This time I’m here to volunteer.”