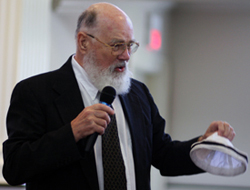 Dr. Keith Baird '56 shared his personal story Thursday of the Apollo 13 moon mission flight that most Wabash men have only heard about through the movies.

Baird was one of the attending physicians for the Apollo 13 astronauts and was aboard the aircraft carrier in the South Pacific when their capsule was recovered after a remarkable journey home.

The former campus doctor used ABC New video coverage of the event to share behind-the scenes stories about the astronauts, NASA, and his career.