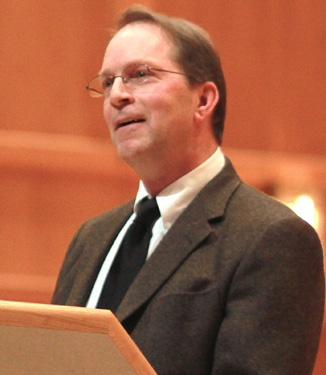 For a while on the last Friday afternoon in October before Halloween, Dwight Watson had his audience seeing ghosts in Salter Hall.

(See a photo album from the event here.)

The writer, actor, director, and Wabash theater professor was delivering “”An ‘Abridgement’ Between Nathaniel Dunn’s and the Graveyard,” the 30th LaFollette Lecture. And though conjuring is atypical of academic talks, Watson noted that “ghosts are not altogether absent in the theater.”

“There are ghosts in the wood paneling on the stage wall behind me,” he told his Salter Hall audience. “Some are more evident than others and they usually line up in threes and fours."

For 30 seconds—as eyes scanned the grain of the wood paneling—the lecture became a leap of the imagination not unlike theater itself.

Not unlike the “synapse” Watson had described earlier—that "gap or open space between the axon and dendrite that works like a bridge between the two."

Or the ways an actor can become, as Watson said, "a direct-line connection between two worlds.”

Thirty seconds reminiscent of the energy, challenge, and collaboration that makes theater important to so many Wabash students and such a necessary discipline to the liberal arts. And a LaFollette Lecture that brought imagination, thoughtful reflection, and a self-deprecating sense of humor together in the way that makes Watson an essential artist and citizen of the Wabash community.

“Engagement with students and the wider Wabash community life is Dwight’s signature,” said Dean of the College and last year’s LaFollette Lecturer Gary Phillips as he introduced Watson. “He has fashioned a career of teaching, scholarship, and leadership that serves as a model of the Wabash teacher/scholar.”

The author of nine books and plays, with his creative work appearing in seven different anthologies, Watson has been a presenter or invited speaker at 18 regional, national, and international meetings, and has received playwriting awards in more than a dozen different competitions.

“He has directed 40 plays on the Wabash stage, all of which, as is his practice, fully involved students in the critical and creative work of assistant directing and stage management,” Phillips said. “By his choice of classical and contemporary dramatic works—Beckett, Brecht, Chekov, Golding, Ibsen, Moliere, Shakespeare, Sophocles, Stoppard, and his own plays—Dwight has enabled the Theater Department, and the Fine Arts, to be a leading voice in raising the great liberal arts questions, the enduring questions.”

“Theater is an imperfect art that holds a mirror up to an imperfect world,” Watson said. “Theater is about our limitations, [yet] theatre is about freeing ourselves—audience and performer—as best we can, from those limitations. It is about pursuing an action and experiencing a transcendent moment.

He quoted the late Bill Placher's LaFollette Lecture from 20 years ago: “One of the functions of the humanities is to capture the transcendent in the single, ordinary moment.”

“If we read a text aloud, as I encourage my students to do, we awaken our senses and just might feel the heartbeat of a writer," Watson said. "If we take the challenge to think and feel as if we were Prospero, Hamlet or Dr. Stockmann, to surrender to their movements and actions, to assume, for all intents and purposes, a well-drawn literary character—a character uniquely created for human inhabitation, we open up the character’s world, and, in doing so, we begin to realize an expression of freedom.”

Watson spoke of the symbiotic relationship between theater and the other disciplines of the College.
“My art, the theater, may very well be deprived of meaning if we remain isolated and divorced from others,” he said, noting that in the College library the plays of Ibsen rest beside the Annual of Scientific Discovery and opposite “shelves heavy wit the history and philosophy of science…Theater art and science meet in the most unlikely places.”

“Theater was built on the ideas of integrative learning. It is hybridity… theater is memory, people and patterns, and community. It is as much a “Street Scene,” as Bertolt Brecht would call it—or a demonstration, a simulation, an experiment or an assemblage, as it is recreation confined to a proscenium stage, picture frame, or a monitor. It is the liminal, the virtual, the avatar, the ghost.”

And a pursuer of truth. Watson described the scene in Hamlet in which the prince stages a play to draw out his father’s murderer.

“Does anyone else think it is odd that he used actors and the stage to solve the mystery of his father’s death?” Watson asked. “What kind of CSI technique it that? ‘The play’s the thing/Wherein I’ll catch the conscious of the King.’ Really? No DNA technology. No forensic biology. Forget demonstrative evidence, ‘The play’s the thing.’ And so it is.”

When the actors arrive, Hamlet says, “for look where my abridgement comes.” 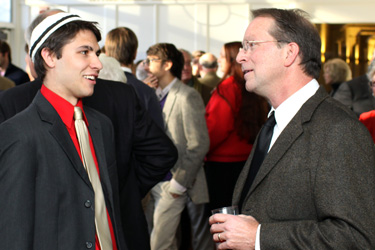 “It is a mysterious and paradoxical choice of words—‘abridgement,’” Watson said. “On one level it is easy to assume that Hamlet welcomes the actors to cut through the unpleasant and tedious conversation that he is having with Polonius. [Yet] I am also struck by the noun ‘bridge’ in ‘my abridgement comes.’ For me, this is a transcendent moment. It is as if the actors were Hamlet’s direct-line connection between two worlds—the real and the imagined, the past and the present, judgment and feeling, innocence and guilt.”

“My ‘abridgement’ between Nathaniel Dunn’s and the graveyard is the theater and its ‘strains which have descended to the present time,’” Watson concluded. “It is the stage, not this one, here, but its neighbors: Ball and the Experimental. If there are ghosts in Salter, I can assure you that, for me, the phantasm of sound and movement is very much alive and true in those spaces.”