An early seven-point lead exploded into a blowout victory for the Little Giant basketball team Friday night at Chadwick Court. Wabash cruised to a 72-50 rout over arch-rival DePauw to avenge an eight-point loss to the Tigers 12 days earlier in Greencastle. 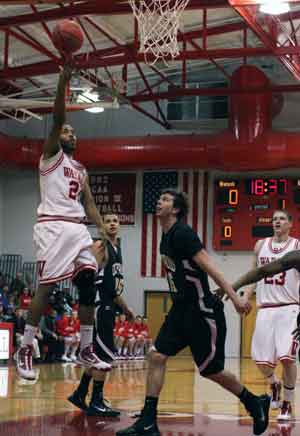 The 22-point victory was the largest winning margin since a 71-46 win by DePauw in 2003 and the biggest for the Wabash since handing the Tigers an 82-65 defeat at Chadwick Court in 1998.

"We finally saw how we can play if we put forth a good effort over 40 minutes," head coach Mac Petty said.

Wabash held the Tigers to eight baskets in the first half and nine in the second with only five three-pointers. DePauw entered the contest averaging 73 points a game and scored 65 against the Little Giants in the previous meeting earlier in the season.

The Little Giants raced out to a 6-0 lead behind a three-point play by Wes Smith and a trey from Chase Haltom. The lead stretched to 12 points with less than two minutes remaining in the first half before a three-pointer by Steve Lemasters cut the Wabash advantage to nine at the break.

Wabash opened the second half with a 13-4 run to push the lead back up to 18. DePauw would never get closer than 14 points over the final 20 minutes of the contest. 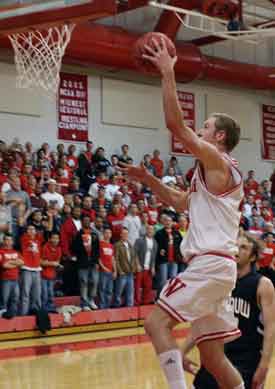 Smith and Haltom each finished with 16 points to lead Wabash in scoring. Sophomore Aaron Zimmerman tossed in a career-high 12 points by hitting 3-of-5 shots from the field and all six free throw attempts. Aaron Brock added 10 points and six rebounds. Brian Shelbourne grabbed a season-best nine boards to lead the Little Giants in that category.

Smith and Haltom each joined Brock as members of the 900-point club. Haltom has 914 career points, Smith has 906, while Brock has tallied 921.

Wabash (4-4) returns to action on Sunday, December 20 with a North Coast Athletic Conference road game at the College of Wooster.

Photos - (top left) Wes Smith drives for two of his 16 points in the Little Giants' Friday night win over DePauw.