The Wabash cross country team was picked to finish second by the North Coast Athletic Conference coaches, and delivered on that selection Saturday with a solid team effort at the championship meet held in Delaware, Ohio. 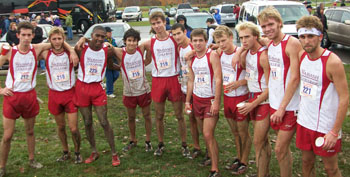 Junior Seth Einterz and sophomore Kevin McCarthy broke up the pack from Allegheny to take fourth and fifth place respectively, while fellow sophomore Donavan White returned from injury to score a 14th-place finish.

Einterz posted his fastest time of the season, finishing the 8000 meters in 26:07.7. He earned First Team All-NCAC recognition for the second consecutive year to become a three-time conference honoree. McCarthy was a fraction behind his teammate, crossing the finish line 26:08.00 to receive First Team All-NCAC honors, as well. The duo finished 14 seconds behind race winner Jeremie Parker from Allegheny, who won with a time of 25:53.0. 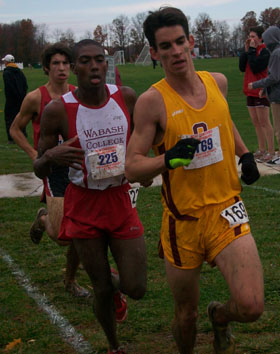 White missed much of the 2009 season with a foot injury, but worked throughout the fall to be able to return for the conference meet. He finished 27:13.6 to earn a spot on the All-NCAC Second Team.

The Little Giants are off until November 14 when they will compete at the NCAA Division III Great Lakes Regional at the Gibson Family Cross Country Circuit in Terre Haute, Indiana.

(Bottom left) Sophomore Donavan White battles an Oberlin runner near the end of the race. White and the rest of the Little Giants defeated Oberlin to finish second in the final team scoring.