Phillips Calls for Colleagues to 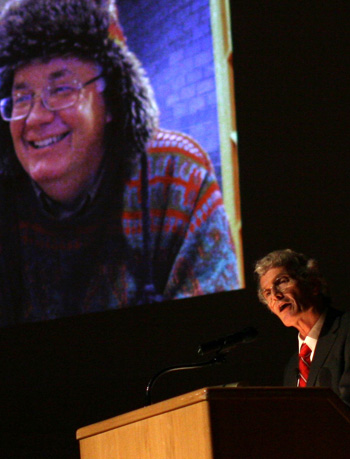 Scrutinizing the Bible through the lens of the Holocaust and reading from the final work of one of the College’s most beloved professors, Dean of the College Gary Phillips declared Friday that teachers and students of the liberal arts are called upon “to witness, to make the truth, and to do something to repair the world.”

As he delivered the 30th LaFollette Lecture, “The Dominion of the Dead and the Witness of the Liberal Arts,” the Bible critic and author said this work of mending the world is our responsibility not only to the living and future generations, but to the dead for the lessons they have passed down to us.

In the most poignant moment of his presentation, Phillips read from the last scholarly work written by Bill Placher ’70, the internationally respected scholar, writer, award-winning teacher, and LaFollette Professor of the Humanities at Wabash who died last November. His theological commentary on the Gospel of Mark will be published next year by Westminster John Knox Press, and Phillips quoted it as a photograph of Placher shone on the screen behind him.

“We have heard the story,” Placher wrote. “It is up to us, in our lives and testimony, to tell it and keep it alive.”

Much of Phillips talk focused on the paintings of Holocaust survivor Samuel Bak, whose art changed the way Phillips reads the Bible and has led him to author and edit several books on the artist.
Many of Bak’s paintings “reappropriate classic Christian representations of creation,” Phillips said as he displayed an image of Bak’s “Creation of Wartime III.” In the painting an exhausted refugee collapses in a bombed-out building, reaching out toward an empty silhouette of the image of God depicted by Michaelangelo in the Sistine Chapel.
“Scenes of destruction and construction, of tentative survival, of tenuous restoration, Bak’s reimagining's alter perspective and enable us to gain a different depth perception,” Phillips said. “By shifting our focus from the world’s creation to a world in need of mending, he offers us precarious representations of tikkun olam, ‘the repair of the world.’" 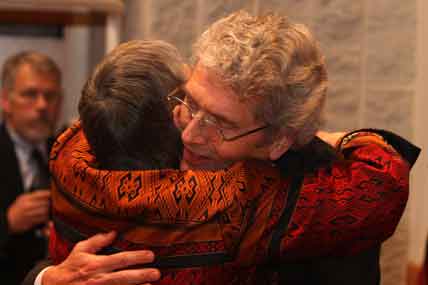 Rather than obliterating the truth of the Biblical texts, Phillips said that viewing them through the lens of Bak’s work leads to a deeper reading.
“Bak lives in doubt before Michelangelo’s vision of creation and divine providence, a vision that many have associated with that of the Bible itself. But, as students of the Bible and of the liberal arts, we wonder if Bak may not be quarrelling with the Bible so much as intuiting the Bible’s own complicated efforts to sort through narrative wreckage and to repair communities fractured by catastrophe.
“Can we possibly imagine that the Bible, too, lives in doubt before theological visions that fail to take into account the horrors of life? Can we imagine that the lofty Bible lives much nearer to the ground than we ever had thought? “

Phillips displayed one of Bak’s best-known works, a series of paintings based on the famous photograph of a Jewish boy in the Warsaw ghetto, his hands raised on the orders of a Nazi guard.
“The child is caught in the cross-hairs, bearing a cross, awaiting execution,” Phillips said. As a boy himself in the ghetto of Vilna, Poland, Bak's closest boyhood friend faced a similar fate. As an artist, Phillips said, Bak “concludes that traditional Christian theology of the Cross has little to say to, or even about, a child of the Shoah.”
Phillips read from Bak's memoir, Painted in Words: “In some ways I felt luckier than Jesus. My dead father, a miserable prisoner of a Nazi camp, never pretended to be all-powerful. He was no master capable of creating worlds! Yet he saved me in the direst of circumstances from certain death, whereas Jesus’ father, willing to see his son suffer, ignored the plea “Why have you forsaken me?” and let him die on the cross.”
So in Bak’s “Crossed Out II,” Phillips explained, “The lost boy of the Warsaw Ghetto is positioned as a different, this-worldly Christ child. Transported from the street to his place of execution, the child stands before us, crossed wooden beams sandwiching his torso, marking him a clear target.
“By any theological or other measure, we are witnesses to a scene of perverted justice. As we face this child and the fate we anticipate is about to befall him, we realize that God is not the only party in question. Where are we in this picture? Are we dispassionate onlookers, reluctant bystanders, eager spectators, sightseers unprepared or unwilling to interrupt the violence? What are we willing to do?”

Philllips said that “such challenges to an unresponsive god and an implicated community” can also be found in the Gospel of Mark, “whose abrupt ending pictures Jesus’ disciples in stunned disappointment, disbelief, and disarray.”

Most Bible scholars agree that verses were later added to Mark's original Gospel, which they believe ended with verse 16:8: "And they went out and fled from the tomb; for trembling and astonishment had come upon them; and they said nothing to anyone, for they were afraid."
“Just as we are implored to bear witness to Bak’s crucified boys and to consider our own responsibilities in a world hell-bent on destroying children,” Phillips said. “Mark’s audience is also pressed with the ultimate questions: Is this the promised end?
“The ending leaves the final act of world repair to the reader: How does one respond to an incomplete sentence, to an empty tomb, to a community paralyzed by fear?”
Phillips read from Professor Placher’s book on these same verses:
“Perhaps it is just these features of Mark that make a particular appeal to our age of uncertainty, when a Gospel that ends with Christ triumphantly present is harder to reconcile with the horrors of the world around us and the doubts within us. Mark throws the ball to us, as he did to his first readers. The three women run away silent, but we have heard the story; it is up to us, in our lives and testimony, to tell it and keep it alive.”
“One might argue that the Bible habitually ‘throws the ball to us,’ leaving the final acts of world repair to its readers and its listeners,” Phillips concluded. “How does one respond to… betrayed covenants, broken promises, abandoned homes, forsaken cities, lost jobs, devastated budgets, wrecked economies, and broken dreams? Can we identify with the wounded?
“And so it is to each one of us, humanists, teachers, and students of the liberal arts alike, the ball is tossed to us repeatedly, every day, by our predecessors… That is as it should be. The dead speak to us, they call upon us liberal artists, fraught as we are with doubts and questions, to witness, to make the truth, to do something to repair the world."

In photos: With the image of the late Bill Placher displayed on the Salter Hall screen, Dean Gary Phillips reads an excerpt from the professor's final scholarly work; after the presentation, Phillips gets a warm hug from LaFollette Professor of the Humanities Leslie Preston Day in the Salter Hall lobby.