The inaugural Wabash Day effort in Zionsville was a great success! 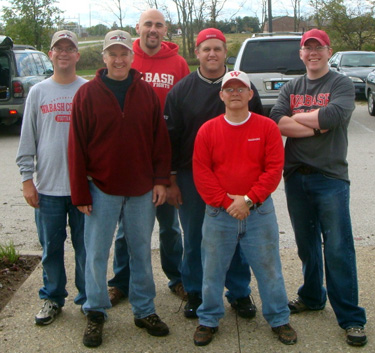 Zionsville-area Wabash alumni volunteered to support the Boys & Girls Club of Zionsville. The Club's mission is to offer a positive and nurturing environment where kids can learn new skills and develop a greater sense of self. The Club serves the area's children at two locations, and Wabash alumni completed beautification projects at both locations.

One group of volunteers cleared two large beds (including five trees) at the entrance of the Club's "West" facility, planted new shrubs and ground cover to replace the overgrown and unhealthy trees, and relocated some existing perennials. The first group also did some weeding and other miscellaneous tasks. The second group of volunteers painted the curbs of an expansive driveway and parking lot at the other of the Club's two locations.

The Zionsville Boys and Girls Club's Executive Director, Tim Fretz, guided our efforts and expressed his appreciation for the hard work of the Wabash alumni. Thank you to an outstanding group of volunteers in Zionsville: