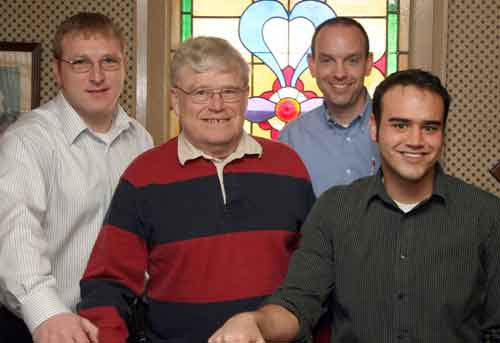 Steve Charles, Louisville, KY — Began the day surveying the battering the forests of Kentucky took during last week’s ice storm. All along the road between Nashville and Louisville the trees looked like they’d had their arms and heads lopped off. You couldn’t even pull over on the shoulder of the road. It was blocked by fallen trees for miles.

Which is a lousy way to begin talking about a great day.

Started with lunch at John E’s Restaurant on Bardstown Road with the founder of Mission Critical Inc. Phil Deamer ’67, and three Wabash men he hired right out of college—Mark Gehl ’98, Brian Harrington ’99, and Scott Salai ’06. Phil is a programming genius, and each of these men’s stories is too rich to even start to go into here. I’ll unravel them as I transcribe the tape later today. But again the theme of generatively — of passing along what matters to the next generation — was there.

There is an art to the kind of computer programming Phil Deamer did, the work that has made much of what we do today with technology possible. Mark told me about sitting alongside Phil at the computer for hours, watching him “code.” I couldn’t help but think of the days when journeymen luthiers passed along their craft to apprentices who watched them work in much the same way. Today, Mark is teaching the next “apprentices” a new version of that work.
Phil intentionally hired liberal arts graduates — four from Wabash — and once he hired them, he “gave them the vocational training they’d been wise enough to avoid.”
Like I said, too much stuff to even begin writing about here.
But among the things I learned today was that hosting four Wabash men for lunch not only yields stories, but it’s a lot of fun, too. The guys were patient and great sports as I photographed them in various places around the historic restaurant (the owner and staff were so welcoming and helpful in this, too.)
Had a little time to interview Mark Gehl after the gathering. He personifies something I’ve noticed in all these guys — they don’t go through life with blinders on, trying to put the world in a box they can understand. That same wonder and openness I remember in Mark from his student days is even stronger now. And I tend to learn best alongside those asking questions, as opposed to those sure of the answers. It was a wonderful conversation that made me convinced I need to do this sort of trip more often. Wabash Magazine reaches alumni where they live. How can I edit it if I don’t know that place, if I’m so focused on the campus alumni left, and not on the lives they live today? I have a lot to learn. 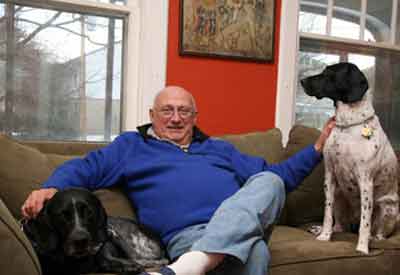 So I went to visit John Fischer H’70. He turned 70 yesterday. I’ve wanted to see his house, especially the rooms that Michael Bricker ’04 designed, for years, and John invited me in, along with his two dogs, Zach and (I think, Zeke, but I’ll have to check out the names with John.) Zach met me at the door carrying a stuffed pig! John’s hospitality and wisdom were the perfect end to a great day in Louisville. I’ve posted a few photos here.
At the end of the day, I got the last hotel room in Elizabethtown, KY. The hotels are packed with electrical workers restoring power to the area and residents who still don’t have electricity. I went to grab dinner at Arby’s so I could download photos at 10 p.m., and the guys with Alabama Power (who have come up to help) were just getting in from 18 hours working in 10 degrees and high winds getting the lights turned back on. I’ll think of them the next time I think I’ve had a tough day at the office!