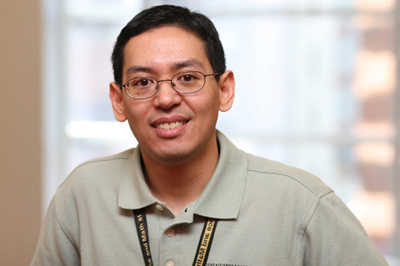 Steve Charles, Nashville, Tennessee — I dragged the bad weather and single-digit temperatures in Indiana down here with me. Nashvillians don’t seem happy about the winds and ice, either.

I escaped both by ducking into the San Antonio Taco Company across from the Vanderbilt University campus. Very “college-townish” — steel tables, plastic lawn furniture chairs, strips of red/orange and light blue neon along the top the of wall, old b/w photos of Texas and Mexico interspersed with the logos of Corona, Dos Equis, Heineken!, and “the Kenny Chesney Poets and Pirates Tour, 2008.” Chicken and cheese enchiladas and rice taste great; Boulevard wheat beer equally fine. Good place to check my notes.

Just finished talking with Joe Lopez ’96, assistant director of the university’s Center for Science Outreach who is also “co-investigator” with the School for Science and Math at Vanderbilt, “dedicated to enhancing scientific and technological literacy through the establishment of unique partnerships between University scientists, K-12 educators and students, and the local and global science community.” Which means that Joe and his colleagues at CSO gives young students a chance to really “do” science, not just read about it.

If I’d had an opportunity like that, instead of the way science was taught when I was a kid, I might be a scientist today. Not that that would be a good thing for the world. Joe could be the poster boy for the liberal arts. He’s done scientific research, earned a Ph.D in biology and a masters in education. Developed curriculum and taught programs for CSO, and now he’s doing administrative work, too, and finding, to his surprise, that he enjoys it.

His colleague at CSO, Harvey Sperling, says Joe’s agility across the disciplines is extraordinary and “speaks well his liberal arts education.” Joe calls it “academic ADD!” But listening to him talk about his path, it seems he just enjoys a challenge, seems surprised at how much new things interest him. My favorite story from our talk: Joe was ABD (All But Dissertation) for his Ph.D and had moved to Texas to finish writing when he took a job tutoring third graders in the public school. He noticed the portable classroom he was working in had a bunch of unused science equipment, and he asked the principal if he could use it to introduce his third graders to science. By the end of the year, the part-time tutor had a much bigger job, taking not only the third grade classes into the lab but all of the classes; working with the to grow a school garden, teaching them the fun and wonder of doing science. This from a guy who before he started “didn’t even like kids.” 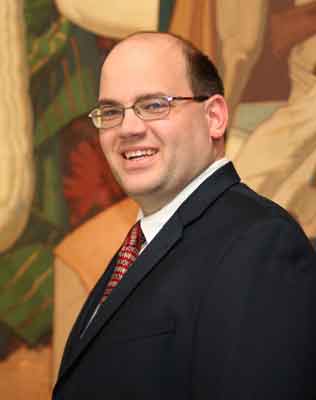 Later in the day I went to see Ben Whitehouse ’99, now Tennessee Assistant Attorney General Ben Whitehouse. Ben grew up in Nashville, so this job (he’s been here about a year) is a homecoming for him after Wabash, grad school at Knoxville, and as a member of the Navy’s JAG Corps (which took him to Texas, Yokosuka, Japan and on the aircraft carrier U.SS. Theodore Roosevelt (CVN-71)).

I knew Ben at Wabash primarily through his work on radio with my colleagues Jim Amidon ’87 and Brent Harris. Walking into the John Sevier Building security and seeing him at work was a real eye-opener. Not only seeing the important cases he’s working and writing, the souvenirs and awards on the wall. But even during his Wabash days Ben had a deep understanding of the importance of community, of the essential though sometimes unglamorous things that need to be done to keep a community alive. Listening to his JAG stories, seeing him at work here in his hometown, noticing a photo on the wall where he’s with his colleagues in the Boy Scouts, leading a group of young men and women on a wilderness cleanup project, I got a better sense of where that understanding comes from. “I enjoy handling cases that have a community impact,” Ben says. Nashville is lucky to have him back home again.

And Ben gave me the line that may best describe this trip so far. He’s been in scouting since his “bobcat” days, mentors young men today (even brought three up to the Bell Game this year). He had the pleasure of seeing one of the young men he’s mentored enter law school this year, and the boy’s mom told Ben he’d been the boy’s inspiration.

“There’s nothing better than to see a kid grow up like that,” he said. To watch him become a man, perhaps do things greater than even he had imagined.

Even though I've had nothing to do with any of these alums education, I feel much the same way as Ben does as I meet these students 10, 11, 12 years out of Wabash, going to the places where they are doing things greater than they had likely imagined at Wabash. It takes the Wabash education beyond rhetoric and into the day to day effect these guys are having in their new, or old, communities.

I keep thinking of Al Pacino’s line at the end of Scent of a Woman, when he tells the teachers at the school where his young friend Charlie is attending, “You hold this boy’s future in your hands. It’s a valuable future. It’s going to make you proud some day.”

And so it does.