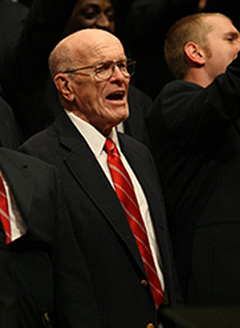 Indiana Senator Richard Lugar was among many expressing sorrow at the death of Dick Ristine ’41, one of Wabash's most beloved sons.

Lugar said, “Dick Ristine was a courageous Lt. Governor and a remarkable Indiana leader in a host of government, education and civic activities. My phone conversation last week with Dick and his wife, Lou, brought back many memories of our times together at political gatherings, on the campus of Wabash College, at Beta Theta Pi fraternal activities and community events in Crawfordsville. He was always ready to take on leadership duties as he did in the 1980’s chairing the Lugar Merit Judicial Selection Commission.

“The state of Indiana and his many friends will miss him very much, while appreciating his great character and remarkable life of service."