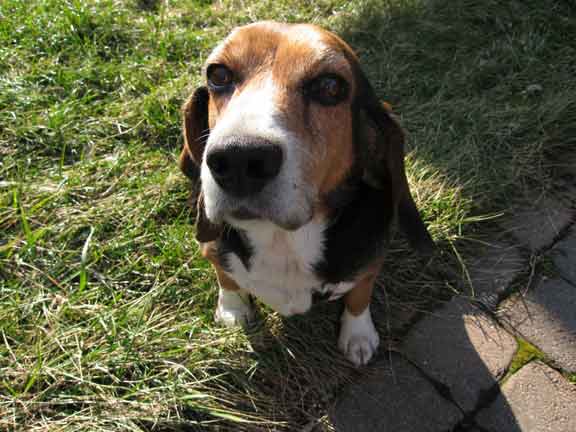 He wandered into my life as an uninvited guest at a dinner party.

Feeling overindulged, I had stepped out onto the front porch for a smoke. It was one of those perfect autumn evenings in Indiana, and a cool breeze rustled loose the leaves from the stately oaks that lined my colleague's quiet street. She had opened the front door to let out some of the heat from the laboring oven, and I could hear the ring of laughter and toasting wine glasses through the glass of the storm door.

It wasn't the sounds of delight, however, that lured him to the front doorstep that night, but, rather, the delightful aroma of food. I watched as he trotted purposefully up the sidewalk, nose held high, then turned down the front walkway toward the front door. His absurdly short legs—he looked to be either a beagle, a basset, or some cross between the two—held him just high enough to put his nose against the glass and peer in at the gloriously stocked dining-room table.

Anticipating the chaos that would ensue were this party-crasher to find his way inside, I tried coaxing him away from the door, and he came, though reluctantly, with head bowed and wagging tail hidden under his hindquarters. His coat was dull and dirty, and he had no collar, though there was a ring worn around his neck where one must have been. I stooped to pet his smooth head, and he kind of flinched and squinted his big brown eyes. As I leaned in, I could smell a sickly sweet infection festering in his ridiculous floppy ears. I told him he was a good boy and he gently licked his lips in assent.

After a few minutes, I left my new friend on the front porch and returned to the party to ask around about him. Did my hostess know whose dog it was? No. Did her neighbors who were there at the party? No. Had anyone seen him before? No.

I assuaged my pity by telling myself that when the front door was closed, the revelers gone, and the house dark, the old dog would probably just skulk on home. I kept telling myself that until around 11 o'clock, when I walked toward the street to leave. The front door was closed and the house was dark behind me. And my new friend, looking dejected and pathetic, hopped onto a porch chair, curled up, and sighed.

Several months earlier, the girlfriend I'd lived with for four years had taken our dog and moved to New York without me. I took it hard. I was feeling rangy, scruffy, undernourished, and neglected. And when he plopped himself down on that chair, defeated, I saw in that old hound dog something of a kindred spirit. I lured him into the back of my SUV with some leftover pork roast and resolved either to help him find his home, or make my home his.

Over the course of the next few weeks, I drove around looking for “Lost” posters on light poles. I put “Dog Found” flyers in every mailbox in my colleague's neighborhood and hung bulletins in all the local animal shelters. I half-joked to friends that somewhere a little boy was crying over the loss of the family dog and asking his dad where “Old Stinky” had disappeared to. But no one called. No one, it seemed, was looking for him.

To this day, the past life of Stinky (the name stuck) remains a mystery. I had figured him to be very old, judging by the state of him, but veterinarians tell me he is still in his prime. And after a couple thousand dollars' in medical payments for the alleviation of infected ears, rotten teeth, a dislocated hip, and a swollen prostate, he finally looks like it.

In the two years since our fateful meeting, Stinky has helped hunt for wild woodland mushrooms, hiked in desert canyons, swum in Lake Michigan and the Pacific Ocean, and accompanied me to a California saloon where dogs roam free. I like to think that he's better off for my having found him—and that I'm better off for having been found by him, too.

Evan West ’99 is a contributing editor for Indianapolis Monthly magazine, for which he has written about pets, Zyprexa, hockey, murder, nightclubs, and Ezra Pound’s saga at Wabash, among other topics.  His feature on the Indianapolis Ice hockey team was named “Notable Sports Writing” in The Best American Sports Writing 2004.