The scared spouse of an addict. Two neighbors going head-to-head over property lines. The parents of a young man who hung himself in their barn. An HIV-positive biter.

These are only a few examples of the calls Officer Nick Gray ’15 responds to on a daily basis. On a typical shift, the Jamaican-born, Philadelphia-raised, English major is one of eight officers on duty for the Tippecanoe County Sheriff’s Department covering the 503-square-mile county just north of Crawfordsville. 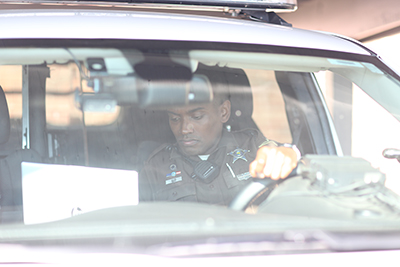 A big part of policing is how I approach people—using tone of voice, body language, and mannerisms they are familiar with. It’s sort of like positive manipulation. A lot of it has been on-the-job learning, but I first noticed the power of communication at Wabash.

There was one day in Enduring Questions when we were having a pretty heated conversation. I watched my classmates argue, and the people who swayed the room and made their points most effectively were the people who knew how to communicate. They knew how to listen and address things in a calm way.

I remember wanting to get to a place where I could communicate that effectively. I got really good at it once I became an English major, but policing sharpened it a lot. I’m thrown into these situations where my life can depend on my ability to communicate with people in these awful, awful days that they’re having.

There are two sides to law enforcement. There’s one that involves routine things like traffic stops and handing out tickets. Or getting called to a house where someone is smoking weed. These are minor things.

Most officers have a wide range of discretion to deal with these issues in the way in which they please. I’ve seen some take a very hard-ass approach to these situations, but to me that just causes more problems. Why would you give a $200 ticket to a guy who’s only doing 5 mph over? That’s ridiculous.

People in our department understand that. They’re not going to enflame minor situations. They use them as opportunities to create positive interactions. If they find a guy with weed, they might not physically arrest him but instead say, “Look, you’re doing the wrong thing. We’re going to confiscate the drugs and give you a court summons. That means you have to go to court and talk to a judge—figure out a process to move off of where you are now.” But jail, a $300 bond, and more financial desperation only complicates the situation.

And sometimes the law requires us to take action. That’s the other side of law enforcement—the violent domestic calls, the shootings, the rapes, and the child molestations—the stuff the public doesn’t really want to see or talk about. A good cop is well-rounded and balanced in that they know how to weigh these two things. They know when to turn on and off, how to recalibrate. Some can only be one or the other.

Finding someone who can do both those things is exceptionally hard. Police officers are expected to be damn near perfect at everything. We are expected to be jacks of all trades—marriage counselors, therapists, parents. I can’t tell you how many times parents have called me to their house and asked me outright to parent their child for them.

If I could call the shots, I would put more money into all of these services. That would help relieve the pressure from law enforcement. But I’d also want to increase the requirements for becoming a law enforcement officer. This would attract applicants with more in-demand qualifications and establish the law enforcement profession as one deserving of more reasonable pay. There are great cops out there now working for little pay—especially considering the risk of the job. They stick around because they love what they do and it's hard to think about doing something else. But that has its limits. You can’t take away resources and expect quality.

A lot of people think I’ve been through some kind of big, traumatic experience, being Black and a police officer. But I haven’t really. On the street, ironically, the most flack I’ve gotten has been from the Black community. I think they see me and my position as a sort of betrayal to the race. It’s hard for them to envision someone who is part of their community but also represents something they see as so contrary to their community values.

That cultural push-back is one of the big reasons why police departments don’t get a lot of Black applicants. It’s hard to reintegrate into the community after becoming an officer. A lot of Black people don’t want to deal with that, so they don’t even look at it as a possibility. Joining the police department, joining the military, are seen as things that White people do. Not something Black people do. 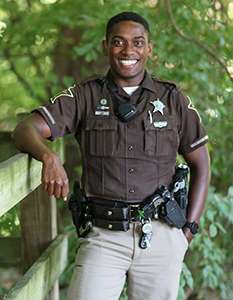 If we want to see positive changes in the policing world in terms of changing attitudes toward minorities, whether you believe that police in general have negative attitudes toward minorities or not, you have to bring in qualified people that understand the cultural and racial issues facing our communities. Their color or gender doesn’t matter. They just have to be able to do the job well and be willing to learn and empathize with the people they serve.

Growing up in Philly in a community that was 98 percent Black, and now living in rural Indiana where it’s 90 percent White, it’s almost comical to see the similarities between the two. There are so many things in common in their belief systems—their philosophies and their values—but you never see it because they never talk to each other.

I have the unique ability to see it because I’m supposed to be this impartial mediator. I’m the fly on the wall with a gun. It’s sad and funny to see the number of things we have in common, knowing that we only harp on the differences.

The biggest thing we can do is communicate. We have to talk to each other, and right now, nobody wants to do that. Everyone is drawing lines in the sand, retreating to their respective corner, and shouting at each other across the room. It’s not going to get anywhere.

That’s what I loved about Wabash. We could get all of these different people in a room and talk about these things, and, at the end of the day, we all went back to our houses and partied afterward.

RED FLAGS
The worst traffic stop I’ve ever had was a guy doing about 15-over. That day, my computer wasn’t working right. I had to run the plate, wait for a response, tell dispatch where I was, and give a description of the vehicle.

We were about three-quarters of a mile down the road before I stopped him near a gas station. He pulled into two parking spots at an angle and slammed on the brakes. The whole car went tipping forward. Red flags were popping up everywhere.

We’re trained to be out of our cars as quickly as possible, get our feet out so we can move if needed. Before I could get out of the car, this dude was already coming at me.

His posture, his fists balled—he was ready to go. He ran up to my car screaming at me. He was in such an emotional up-swing.

At some point, I just stopped trying to talk to him. I was not getting through to him. I just stood there and let him berate me, waited for him to calm down, and for my second unit to get there.

Eventually he settled down and got back into his car.
I approached his vehicle and told him why I stopped him. He said, “I know why you stopped me. I was speeding, but I was speeding three-quarters of a mile down the road. You should have stopped me there.” He thought I was violating his civil rights by not stopping him at the place of the violation.

In Indiana, the law states we have two years to cite you. I said, “I could have followed you for ten miles and still stopped you.” I tried to explain to him why I took so long to stop him and bring the situation in so he had a better understanding of why he couldn’t do that again. I know a lot of guys who would not have put up with what I did. They would have detained him or taken him down. It would have been an escalated issue, and it would have been well within the officer’s rights to do that.

If you get an officer who’s been shot at before under circumstances similar to that, he is not going to stand there and let a guy get out of his car. He’s going to detain him until he calms down, maybe even cite him for something more.

Fortunately for me, he calmed down. I was never going to cite him. But I gave him a warning. Even then he just ripped out of the parking lot. I don’t know what experience he had in the past that triggered him like that.

When he jumped out of the car, that’s textbook—I’m going to get shot at. I really thought I was going to have to draw my weapon because he came out super aggressive, and I didn’t know what weapons he had on him.

I’ve seen so many videos of cops being shot and injured or killed on traffic stops. That’s how all of them go.

I knew I needed to be out of my car as fast as possible. Most people aren’t that great with a gun—they’re just going to fire where they know. He’s going to try to light up the driver’s seat with as many rounds as he can, so my goal is to be as far away from that driver’s seat as I can.

It takes a split second for them to draw and fire. They have the element of surprise with us, because we have to allow them to display a weapon before we can take that sort of action. The law even goes so far as to say that we have to give a command for them to drop it, if possible.

That’s why a lot of officers draw their weapons, because they’re not going to take a chance of getting shot if they don’t have to. It’s a jacked-up situation that I wish he could have seen from my perspective. Maybe he’d think differently about it.