The Wabash College Board of Trustees has elected Scott Feller, Ph.D., to serve as the 17th President of Wabash College. Dr. Feller, who has served as Dean of the College at Wabash since 2014 and as Professor of Chemistry since 1998, was elected by unanimous vote during the Trustees’ meeting May 16 and will begin on July 1, 2020.

“Wabash has been fortunate to have Scott and his wife, Wendy, on our team for over 20 years, and I have personally experienced firsthand the attributes that make Scott the best-qualified person to be our 17th president,” said Jay R. Allen ’79, Chair of the Board of Trustees. 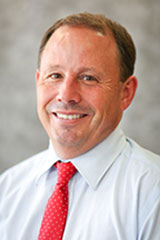 Dr. Feller replaces Gregory D. Hess, president at Wabash since 2013, who accepted the position of CEO of IES Abroad in March.

Dr. Feller has spearheaded the College’s ongoing efforts to expand its academic footprint, focus on student success, and improve operational effectiveness. Under his leadership and with a range of innovative retention initiatives, the College boasted a record-high four-year graduation rate in 2019. He and President Hess helped secure funding to launch the Wabash Liberal Arts Immersion Program, which has dramatically improved the retention and graduation of students from disadvantaged backgrounds.

In addition to his position as Dean of the College, Dr. Feller is the Lloyd B. Howell Professor of Chemistry. He joined the Wabash faculty in the chemistry department in 1998 after earning his B.A. from Willamette University and his Ph.D. from the University of California-Davis. He received the McLain-McTurnan-Arnold Excellence in Teaching Award in 2009. 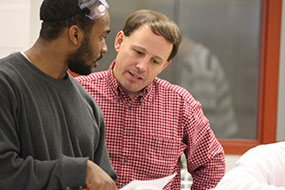 As an administrator at Wabash, Dr. Feller has served as Department Chair, Division Chair, and Dean of the College. Over the course of his tenure, he has hired or conducted tenure or promotion reviews of over 80 percent of the current Wabash faculty. He led efforts to add new majors in Computer Science; Philosophy, Politics, and Economics (PPE); and a number of interdisciplinary minors.

“Scott brings together keen analytical expertise and strategic insights with a broad and deep understanding of the key drivers of long-term success for outstanding liberal arts colleges like Wabash,” added Mr. Allen. “Combining these skills with his warm, down-to-earth personality; his ability and eagerness to engage with students, faculty, staff and alumni; and his deep understanding of and passion for the history and culture of Wabash College, perfectly positions Scott to be our next president and an outstanding leader of the Wabash community.”

Dr. Feller becomes the first Wabash President to rise directly from the ranks of the faculty and administration since Byron K. Trippet, the College’s ninth president, who served from 1956 to 1965.

As a scientist and researcher in physical chemistry, Dr. Feller is the author of 76 peer-reviewed publications 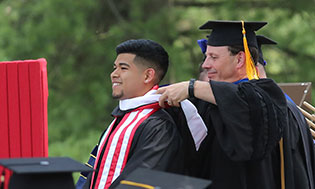 with over 9,000 citations; has given more than 50 invited scientific lectures; and has taught and mentored at least 15 undergraduates who later earned Ph.D.s. He has won national awards from the Biophysical Society, Eli Lilly/Indiana University, Dreyfus Foundation, Food and Drug Administration, and National Science Foundation.