Mr. Stephenson, founder of Cancer Treatment Centers of America® (CTCA), was recognized for his significant entrepreneurial and philanthropic contributions to society at an Awards Gala in Liechtenstein on November 14.

“Mr. Stephenson has shown lifelong dedication to promoting entrepreneurial freedom and individual liberty as a leader, philanthropist, and entrepreneur,” said Dr. Barbara Kolm, AEC founder and President of the Hayek Institute. “We are delighted to honor him and to recognize his success and service."

Mr. Stephenson majored in political science with minors in history and economics at Wabash, and was a member of Beta Theta Pi and the Sphinx Club. He earned a law degree from Northwestern University. In 2013, the National Association of Wabash Men presented him with its highest honor — the Clarence A. Jackson Career Servic 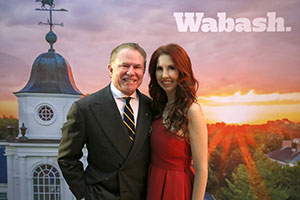 e Award for his lifetime achievements.

“Through the Stephenson Family Foundation, Richard Stephenson has been exceptionally generous to a wide range of philanthropic causes, including Wabash College, for which we are grateful,” said Wabash President Gregory D. Hess. “He models for others the spirit of philanthropic leadership.”

Following his mother Mary’s death from cancer, Mr. Stephenson founded CTCA®, which he has grown into a nationally recognized, patients-first, holistic model of treatment and healing. He has been Chairman of the Board of CTCA® since its inception.

“My parents taught me to live in accordance with a moral code: ‘When you see someone who is less well off than yourself, and you are in a unique position to do something about their plight, without harm to self, family or Lord, you simply step into the opportunity to relieve their burden, as best you can… and just go on about your business,’” Mr. Stephenson said in his acceptance speech. “This is a joyful moment for me. It is a privilege to celebrate all the good work of which we are capable when we are free.”

Prior to founding CTCA, Mr. Stephenson developed a career as a highly successful international merchant banker. While in law school, he established International Capital Investment Company (ICIC), which he still leads as its Chairman. 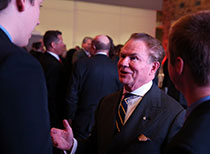 In 1991, Mr. Stephenson founded Gateway for Cancer Research, which to date has raised more than $85 million to fund more than 160 cutting-edge clinical trials around the world.

Mr. Stephenson is a 33° Scottish Rite Freemason, Shriner, Knights Templar, Distinguished Eagle Scout of America, and recipient of the prestigious 2017 Horatio Alger Award, which since 1947 has honored the achievements of admirable leaders who have succeeded despite facing adversity.